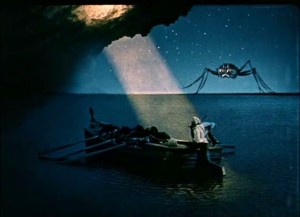 Baron Munchausen is the storyteller who had no other as grand or as economical with the truth. The good Baron lead escapades that saw him travel from the lush jungles to the moon and back. He found the Sultan of Turkey to be in fear of losing his throne. He meet two sides as they battle with great armadas. Both laying claim to oceans vast and deep. The sinking of these two great forces leads him to row into the great belly of the beast. The great lake inside that housed a galley and its crew. He then saw the jewels of an empire and the shores of great distant lands. The fantasy of a lifetime played out for one mans eyes to see… 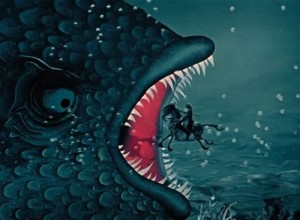 Zeman is a film celebrity. He is one that I have heard of but never seen. That all changed as I sat to watch this. I of course had heard of his influence on Gilliam, Pythons, Burton and brother Quay. This is evident from the first opening cells. I was also aware of his merge of stop motion and real action. A skill that is hard to manage now and must have been amazingly complex then. I was not however aware of how good this film would be for an audience. You should be truly impressed by his skill at telling a story. By giving the story layers of fun and pieces of interest that add to the overall experience of watching it again and again.

This is only half the story, so to speak but it is the most important. It is what makes the film so much more valuable than just as historic record. This is a  masterwork of the absurd and the surreal.  It is a masterwork of animation and creation. It never seems to stand back or hold itself up. It is completely fun and rewards multiple viewing. I even did the classic turn the sound off and listen to Pink Floyd, this worked a treat as well. The work is a must have for anyone who likes cinema that is universal, unique and is bold. It is a stand out from opening frame to closing title… Then of course you have the extras! Which as you would expect from Second Run are amazing. 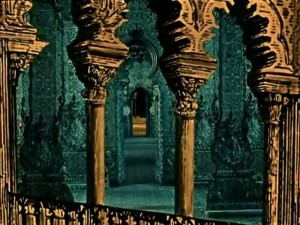 The film is restored to a magnificent look. The saturation of colour and detail of picture is divine. The documentary on the film maker is excellent and opens the influence of his work up to review. Brooke work is worth exploring here as well, he is always informed and intelligent.