With his second major film of the 21st century Martin Scorsese brings us an insight into the legendary film director and aviator Howard Hughes , a snapshot of a life full of glitz and glamour, ingenuity and showmanship. The Aviator, which won 5 out of the 11 Oscars it was nominated for, is an interesting edition to Scorsese’s oeuvre and it’s about time that the film got the high definition treatment. 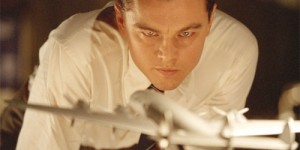 The film charts the turbulent early life and career of Howard Hughes (Leonardo DiCaprio) as he carves out a name for himself in both the motion picture and aviation industry, all the while dealing with his increasingly debilitating obsessive-compulsive disorder. As the film moves through the late 1920s to the late 1940s, Hughes gains success and fame in Hollywood, tries to deal with the pressure from his rival Juan Trippe (Alec Baldwin), the owner of Pan Am Airlines, and becomes completely consumed by his OCD which leads him into seclusion. However over the course of the film we see how Hughes inspired the advancement of technology, influenced film history and fell in love with screen starlets Katherine Hepburn (Cate Blanchett) and Ava Gardner (Kate Beckinsale). Although at the film’s climax he has proven his critics wrong and seemingly overcome the demons that drove him to seclusion, we are reminded that not all is well as his OCD raises it’s ugly head at his moment of triumphant.

Arguably the biggest draw to this film would be director Martin Scorsese, but although the film is quite the technical marvel it would seem that upon further viewing it is perhaps DiCaprio who steals the show. His portrayal of Hughes is nothing short of remarkable as he erases all memories of his performance in Titanic, which Scorsese’s previous outing with DiCaprio Gangs Of New York didn’t quite manage. This is probably due to the material he has to work with as John Logan’s script has the actor twist and turn through the tumultuous life of the legendary film maker. DiCaprio’s Hughes lights up the screen, bringing a sense of enthusiasm and determination which is infectious as you begin to get swept up in Hughes’ ambitions, waiting to see what he comes up with next.  DiCaprio also shows the character’s OCD as not just a burden that is switched on for effect but as a crutch which is as much a part of the man as it is intertwined with the story. This is most effective when Hughes is trying to hide his affliction from the other characters, the mannerisms are there to remind the audience but we also see a man trying his hardest to stay together and the effect is subtle but powerful. It is this level of discipline and dedication that DiCaprio brings to his performance which allows him to claim Hughes as his own and it is hard to imagine anyone else in the role and it is perhaps his defining performance. 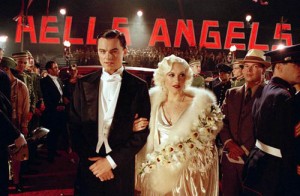 But to be fair to the rest of the cast they do an amazing job bringing their characters to life. Blanchett’s Hepburn is a feisty pseudo intellectual who manages her own eccentricities around Hughes and comes across as perhaps the love of his life that got away. It’s a strong outing for Blanchett and she rightly deserved the Oscar. Baldwin brings a sense of menace and sleaze in his role as Hughes’ antagonist and Beckinsale is adequate as Ava Gardner, but it is John C. Reilly and Matt Ross who stand out as Noah Dietrich and Glenn Odekirk. Both start off the film as employees of Hughes but as the film progresses they become the only real friends Hughes has.  Both come across as loyal men who care for Hughes and don’t just see him as a pay-check.

It would be remiss to just focus on the acting though as Scorsese brings his own flair to the film. The Aviator seems to tread the same thematic ground of his other 21st century works Gangs Of New York and The Departed as all three films seem to deal with characters who rise and fall as they face challenges that are seemingly greater than themselves. But even with these similarities to his other works The Aviator comes across as perhaps a more complex and ultimately the more tragic tale. With Scorsese painting a picture of a man who is fascinating, a man who is arrogant but full of behavioural inconsistencies inherent with his mental illness. Hughes’ thought processes seem alienating and as a main character he isn’t often a comfortable figure for the audience to get behind and more often than not you pity him rather than celebrate his triumphs. But therein lies the point, as much as the film is a character study it is also a look at the consequences of power and how it has an ability to corrupt. The more successful Hughes becomes is paralleled with his growing detachment from reality as the film hurtles towards it’s climax this notion is taken to the extreme and perhaps a little too far. By the end of the film there is a sense of tragedy that comes from seeing Hughes become consumed by his illness and how desperate this once unstoppable force of a man  became. It is perhaps a film that is about the nature of pride and ego more than it is about a fall from grace. 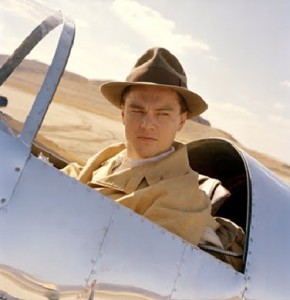 The film itself looks fantastic in high definition with all the glamour and style of the setting vividly coming alive on screen. The amazing set designs can be seen in all their splendour and the image is clean and crisp. Perhaps the most eye opening look of film is in it’s colour palette which is breathtaking on Blu Ray. Scorsese specifically emulated the technology of the time periods the film is set in to give the film it’s unique look. For the first 50 minutes all the film’s scenes are in shades of red and cyan blue, with green objects being particularly blue. This is similar to the early bipack colour films of the time and as the film’s story passes 1935 Scorsese again changes the palette to emulate the three-strip Tchnicolour process of the time. This all mixes to create a visually sumptuous picture, which is striking especially in high definition. However some of the visual effects do suffer from the conversion and aren’t very convincing but that is just nitpicking as the overall product is outstanding. Also it is worth mentioning that the special features for this release are extensive and the audio commentary by Scorsese is fantastic with his fascinating thoughts on Hughes being a highlight. All of this adds to a great Blu Ray release which is worthy of this outstanding film

The Blu Ray is released on the 19th September 2011