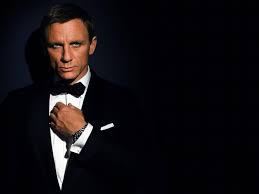 Daniel Craig is the sixth James Bond (seventh if you include David Niven). The best James Bond, for me, is Timothy Dalton. He was closer to Flemings incarnation than any other. Colder, detached, emotionally compromised. However most Bond fans would choose Sean Connery as their favourite. He was tough, powerful and manly. He also had natural machismo After that, the late and truly great Roger Moore appears. A boyish glint in his eye and a genuine charm made him outstanding. Pierce Brosnon was a fan favourite before he made two, truly awful Bond films. This reduced his clout and his respect. George Lazenby vanished after a single incarnation, for the best sounding but over long Bond.  Daniel Craig appears just after the first two for many (not me). He channels a modern Bond. A modern agent. A post 80s sexual and political identity. So with a new outing on the horizon, a collected set of Craigs four films, polished and primed for 4K, has been released to us mere mortals. So will it be a Martini, shaken and stirred or will we be shaken and disturbed?

Bond has always be 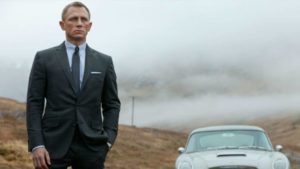 en a victim of the 4 Ts. That being time, text, talent and trademark. James has been caught in the cold war, post wall world and post 9/11 world. Handling all with levels. From indifference to detailed exposure. SPECTRE is key here. An odd marriage of classic Bond and modern paronia. Text is the original stories and the ‘new’ translations. CASINO ROYALE is telling here. Having been made before, badly. Talent is key. Bond has gone through many as we have seen. However few stick because Bond is after all a franchise and that needs convention and a lot of consistency. SKYFALL is key here. Sam Mendes glides through a tight Bond and see M dispatched. Finally trademark. Some like Dalton were caught in the battle between who owned Bond and who wanted to make a play for Bond. This is all very important indeed to us. We need this history before we start on the journey of these films. No film here suffers from this. 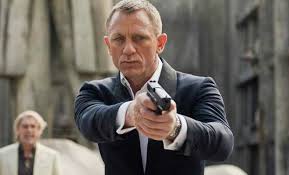 So to the films and the discs. CASINO ROYALE opens the set and Craigs time on screen. It holds up well enough today. Campbells direction revived the series (as did Criags stunt work). The simple enough story of an international profiteer of disasters. Using market speculation to full affect, while Bond romances a femme fatal..literally. It is classic Bond. The fight scenes drag though and the action scenes are an embaressment of excess. I compared the 4K transfer to its Blu Ray equivalent and I was utterly bowled over between the two. Firstly the 4K depth of clarity is awesome. Picture richness, field, depth and grain is amazing. The colour ratio and range is extrodinary. Sometimes it has a sheen which is not off putting. Coming into its own, espically in those tropical locations. 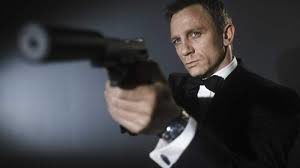 There is some light leak however. Some points of light defuse and make the image a little flat but this is possibly caused more by my screen and less by the disc. The audio has crossed both discs and is very good. If not a little high on the explosion noises. Though the mix is superb. The extras are lite on the ground. The cast commentary has been covered before. Covered and covered on DVD and prior Blu Rays. Its good but it feels like you are running over old ground. 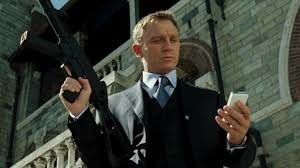 QUANTUM OF SOLACE Starts off from the end of CASINO ROYALE and never seems to get out of its shadow. A weird mix of abstract villan, climate conversations and intenational financing. Lacking some of the zing of its previous film, it has a body count and blood shed which works to up the Craig count and lower the expectations of narratives.  I compared the 4K transfer to its Blu Ray equivalent and I was utterly bowled over between the two. 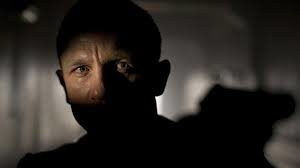 As expected the 4K keeps the quality but really suffers from exterior glare. I hate this but the film is saturated in it. The Blu Ray was. Now the 4K has eliminated a bit of it but it still stings. Sound wise the DTS is excellent. Crisp but no tin at the high end. Not flat at all or crashing out. Another note is that the Letterboxing on smaller screens is terrible. Great on big screens however. The Extras are worth a view but then it really depends on your interest. The best are the on location stuff. Its all been run before however. 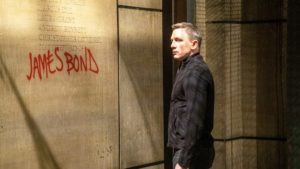 SKYFALL or the best film on the list, is a revenge tail of Hamlet proportions. Simmers with sex, slashes with violence and smattered with intrigue. Craig found his nexus here.  A spy that was seen as dead, reappears and sets out on a course of revenge against England, M, Bond and the whole deal. Bond found his family home as refuse and MI6 gave him back his charter. It works also because Sam Mendes directs it like a thriller defused with an action drama. Seen it three times and always find it a solid watch. I compared the 4K transfer to its Blu Ray equivalent and I was impressed. Though some slight issues rise between the two. 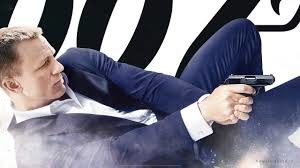 Light and dark are the key here. The final act, (which is an homage to explotation and cheap home invasion films) looks exquisite. Its the details missed in the DVD and Blu versions that are most interesting. The frost, the glint of light, the tundra. Now that is not all. Running between the shadows feels frightning. The bold black and tonally colour in the light are absorbing. You feel the intensity and that is when you know 4K is a step forward and a step up. The audio hugs Tom Newman’s score. A vibrant, fits in well, Bond centre score that is graceful and punching. The Extras are the same as before but please listen to Mendes et al commentary. His take is serious and subtle. Grappling with the franchise, yet film form also in the back of his mind. 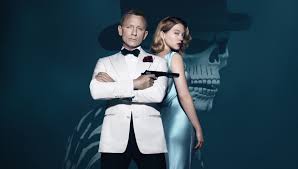 To the last act on the disc. SPECTRE. Starts well enough but drifts into the absurd and irrational. Ending up as a blouted stinking hulk of naffness. It cost a lot. So much that it was considered one of the most expensive films ever made. A below par script about an international crime syndicate. Bond is sent out to stop it at all costs but now dead and literal spectre (pun me thinks?) M. He is suspended and so begins the game of evil and villanious monsters. Craig is bullish, sent out to be a rogue and seems halfway to be awaiting his P45. Mendes jams too much in and I have to complain about the cast, ewho seem to be a mix of dont care and dont bother. I compared the 4K transfer to its Blu Ray. 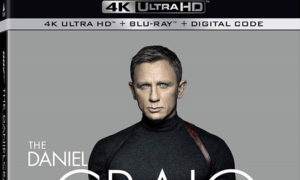 Having to watch it twice was jarring but it probed two details. The 4K UHD picks up an amazing fluid camera movement in London. This blurred in DVD world but comes to life in clarity. The colour pallete is so drained and it distorted the range of an image. So when you pause, it is not clear in anything but 4K. Right the second you ask? Its that detail per frame. Stop it. See it. Bang, Bang,Bang.