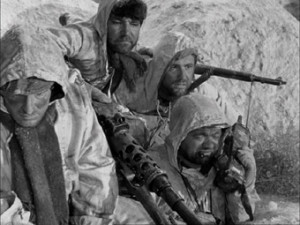 The Korean war is in full swing and the UN armed force has to withdraw a 15,000 force. When a platoon is ordered to stay behind they had an idea it was going to be tough. When however they see that they are going to be holding back a massive opposing force, it becomes far tougher than expected. This becomes even more complicated when they discover that they are a decoy for an advanced withdrawal of their own side. Now they have to fight for their lives. They are massively out numbered, outgunned, out played but they have something else that could help them…. each other. 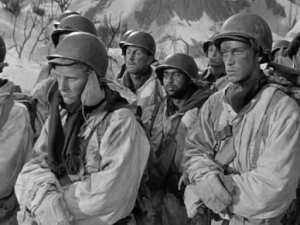 Fuller made films with bite and with courage. He took a sword to the screen in many of his films. This film would be linked to his later film, The Big Red One and rightfully so. The Big Red One is a fierce piece of cinema as history. A film that took a fist and smashed you in the god damn eye with it Fuller fought in WW2 and reflected much of his own experiences in that film.He put in all the grim, guts and grim detail of the life and times of a grunt. He made us feel what they did, told us the stories that they experienced. He even underlined the great ways soilders find to save there hides in fire fights and from desert conditions. 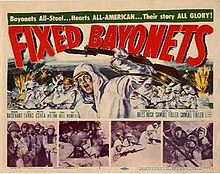 In Fixed Bayonets! some of that powerful film making and gutsy stance is on display. He captures the landscape, close quarter combat and hardship (both physical and mental) of war. For me the brutal conditions in extreme climates make you feel it, like few other films do. He however seems to be a little concerned with upsetting the American army in places and pulls punches. The gung ho, altogether show is a little dire and feels forced. Unlike The Big Red One, this film feels a little to close in mind too those Hollywood hails the army pictures. It is still cinema of the explosive kind but just a firework and not a hand grenade…

Blu Ray looks great and sounds superb. The additional booklet is the thing to sing about here, filled as it is with some great work. The discs 4k transfer is awesome, the commentary is good from Martin as well.