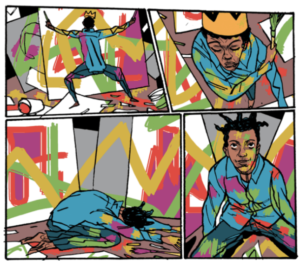 Is it fair to say that some artists have a name without having a backstory? We all know Van Gogh and his ear removal, religion and love. Or take Picasso and his money, politics and the like. Basquiat by Julian Voloj and Soren Mosdal is for the most part an overview of a artists life, with a smattering of the dynamic motivations of history and rage but without any of the existential rage left out. Now this could be because Basquiat is still very much an enigma. A creature know and unknown in the world of art. Which this book fails to fully extrapolate. 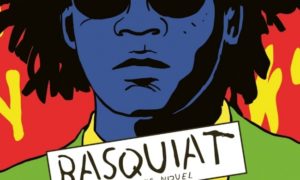 When you navigate any journey of a life, it is hard not to be confused by the routes taken. 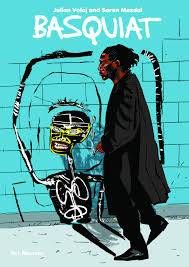 The problem is finding the components that make for a compelling narrative but still communicate factually the intricate moments. The problem with Basquiat is that akin to the lives of the band the Prodigy. They were mostly behind the scenes, slow genius which had little in the way of exuberance, energy or radicalism. Basquiat lived an artist life that was not filled with amazing adventures.

The question then is, what makes the work worth reading? Well it has to be the art work. Spurts of drama, a layer of vibrancy and flashes of ethnic form. Soren Mosdal has translated a lot of what made Basquiat a great artist with this. The fusion of identity, graffiti imagery and potency captures some of the visual majesty.