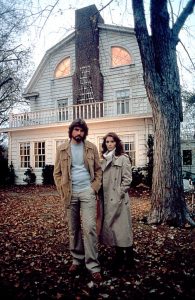 From the true story of a house that witness murder and became the location for all manner of nasty goings on, comes the film of that story. Well kind of. Early one morning in November of 1974, Ronald DeFeo Jr. murders his entire family. Shooting them while they slept. His surburban home in Amityville, New York, becomes the setting for the grizzly slayings. One year later, George (James Brolin) and Kathy Lutz (Margot Kidder) are a young married couple who decide to move into the property. George and Kathy have three children. They are actually Kathy’s from her prior marriage: Greg, Matt, and Amy. Kathy and George are Catholic, Kathy strongly tied to the faith but George a convert for their marriage. When they ask a father from the local church to bless the house, he is disturbed and suffers horrible sickness, flies attack him and a voice orders him out of the house. The evil within the house is about to take control… 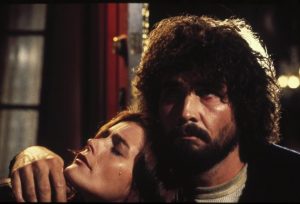 The problem with films like THE AMITYVILLE HORROR is they come with an assortment of baggage. This is often critical or audience popularity polls raving about its qualities, its power, its fright packed scares. Does it live up to any of this? Yes and no. You might ask if I haven’t seen it should I? The answer is yes but let the film run and watch it through the eyes of then and the logic of now. Its core. Acting, direction, score etc are nuanced and build tensions. Yes it does have the clever jumps and shocks in the right departments. Its drama works because it is underplayed and enveloping. So it occasionally packs a punch. 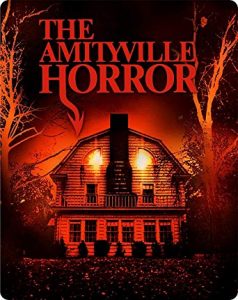 However it lacks the overall sentiment that would have been at its centre then.  It lacks the unsettling truth factor after it has been investigated and found to be a lot of distorted half truths. This can be eased by alternative interpretations of the film and they are actually very rewarding. Stephen Kings version about the film being a film about debt is compelling.