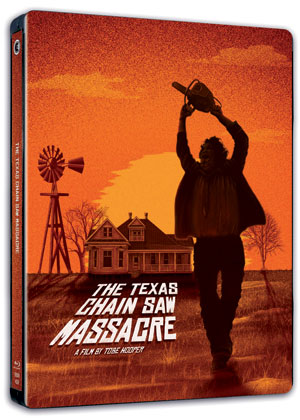 The Texas Chain Saw Massacre not only changed the face of horror in 1974 but still remains one of the most shocking, powerful and terrifying films ever made. Now to celebrate its 40th Anniversary, a brand new restored version comes to Blu-ray courtesy of Second Sight.

Widely banned on release, its notoriety has not diminished and this harrowing tale of a depraved Texan clan and its chain-saw-wielding icon of horror Leatherface continues to stun and disturb audiences like no other film.

Supervised by director Tobe Hooper, The Texas Chain Saw Massacre has received a stunning 4K restoration and 7.1 audio mix, looking and sounding like never before. The film will be released as a two-disc limited edition Steelbook blu-ray with brand new artwork created by Doaly and stacked with brand new bonus features, a standard two-disc Blu-ray, with reversible sleeve featuring the new artwork and the original U.S. poster artwork will also be available, on 17 November 2014.

We have 2 Blu-ray copies to give away!

Which film did Tobe Hooper not direct?

a) Poltergeist
b) Last House on the Left
c) The Mangler