Win My Generation on Blu-ray 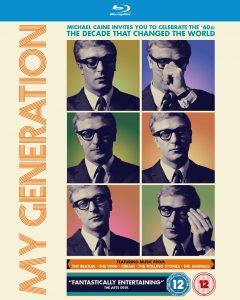 LIONSGATE HOME ENTERTAINMENT UK is pleased to announce that MY GENERATION – the engaging and evocative documentary presented by Michael Caine about life in sixties London – is available now on Digital Download and on Blu-ray™, DVD & Limited Edition from 28th May. To celebrate, we’re giving away 3 copies of the Blu-ray!

Transporting audiences back to the ‘swinging sixties’ through the eyes of an icon who helped shape this remarkable era, MY GENERATION was released in cinemas across the UK and Ireland in March, coinciding with Michael Caine’s 85th birthday.

Based on personal accounts and stunning archive footage this feature-length documentary film sees Caine travel back in time to talk to The Beatles, Twiggy, Joan Collins, Lulu, David Bailey, Mary Quant, The Rolling Stones, David Hockney and other star names.

The film was painstakingly assembled over six years to tell the story of the birth of pop culture in London, through the eyes of the young Michael Caine: “For the first time in history the young working class stood up for ourselves and said, we’re here, this is our society and we’re not going away!”

To be in with a chance of winning, just answer this question:

Which of these was Michael Caine’s first on-screen role?

a) The Italian Job

MY GENERATION is available now on Digital Download and on Blu-ray™, DVD & Limited Edition from 28th May.