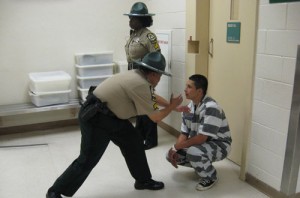 h numerous documentaries that focus on the lives and rehabilitation of some of their worst young juveniles. Crime and Investigation Network’s ‘Beyond Scared Straight’ is a modern take on 1978’s ‘Scared Straight!’ by Arnold Shapiro, and interestingly highlights how thirty-four years have passed, yet we still face the same problem.

The hour-long episode focuses on nine juveniles as young as fifteen years old. The first few minutes, featuring a short background story on a particular three juveniles and their families, makes for a cosy and informative introduction to what is a hard-hitting reality TV programme.

“If I have a gun and someone pisses me off. I shoot it.” Words from the mouth of fifteen year-old José emphasise the reality of the future generations these prisons could one day be home to. The prison in question is Mecklenburg County Jail in Charlotte, NC. This is where these rambunctious juveniles are sent to spend as long as a week with some of NC’s toughest criminals in hope they will re-evaluate their own lives.

Immediately, prison officers and their camera crews verbally target the youngsters, invading their personal space and casting verbal assults, in a shock and awe taster of what will potentially be a gripping TV series. The groups are split in to men and women and plunged directly in amongst real-life inmates. Sergeants allow the inmates to harass them and use any methods they see fit to knock them in to line. “When you come in here, you don’t have a choice.” One shouts. 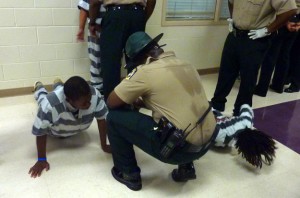 The nature of viewing quickly migrates from exciting to saddening as the viewer’s insight in to these teenagers deepens and they are exposed to the reality of what they have been through, from abusive parents to drug problems. However, the programme itself is constant mayhem, with viewing perspectives switching constantly to the point where you lose sight of what is really going on. The episode becomes quite suffocating at times due to the vastly intimate use of first person. When you are watching juveniles being bullied and shouted at, the close-up shots make you feel as though you are the one doing the bullying.

The end of the programme sees a group discussion in which three of the nine juveniles are allowed to go home. A short catch-up with those three is then featured to see how the experience affected their lives. An interesting update, but even though the episode is meant to document the experience of nine individuals, it only seems to revolve around the aforementioned three, dulling its potential as a successfully well-balanced production.

Overall, one hour is certainly not enough time to broadcast the entirety and serenity of what message the programme is trying to present. Personally, I felt as though the structure was rushed to the point where it was unstable, and I was constantly being provided with new information yet I still left unsatisfied. One can only hope that the rest of the series puts the first episode to shame because, for the first ever release of a brand new series, I am certainly not left wanting more.