Whip It follows the tale of indie teenager Bliss (Ellen Page of Juno fame). Trapped and bored in small town America, working in the local diner ‘Oink Joint’ and dragged around the beauty pageants by her over bearing mother (Marcia Gay Harden) she finds adventure when she comes across a roller derby league in nearby Austin. Bliss is able to express her individualism through her alter ego roller derby character ‘Babe Ruthless’ as well as finding love, friendship and some mighty big bruises. However this all comes at a cost, as she lies to her parents and her team-mates as she juggles placating her mother with pageants and having her own fun at derby’s, with her eventually having to choose between the two.

Like Bliss herself , most viewers wont be familiar with the world of roller derby’s. Basically two opposing teams skate around a circular rink and try to overtake each other to score points, while members of the opposing team try to prevent them getting through. It’s exciting to watch, and just like any good sport movie you will find yourself willing the team on. Bliss possesses a quality most angst ridden movie teens don’t seem to possess, empathy. She goes through with the pretence of these pageants as she loves her mother regardless, and wants her to be happy. It’s very refreshing to see a cinematic teenager who is able to feel more than anger and resentment. Similarly, the film is unique in that it doesn’t rely on happy ever after clichés and idyllic love stories as it stands apart from other American independent films. 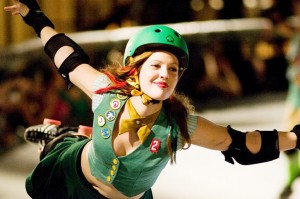 Whip It is Drew Barrymore’s directorial debut, and like many actors turned directors she can’t resist the acting bug and cast herself as one of the girls on the roller derby team. Apart from Ellen Page the rest of the cast is made up of mostly unknowns who give terrific performances. Page is perfect as Bliss, with great comic timing and a truly honest depiction of teenage angst and suffering.. A couple of the newer faces  are not as brilliant at line delivery so the film occasionally feels wooden, especially the team coach Razor (Andrew Wilson) who is given some great one liners which he somehow manages to make seem flat and unfunny. Overall, Whip It has a great cast and the superb script makes up for this, which could be attributed simply to Barrymore’s lack of experience at directing actors.

Despite a few weak moments, including some rather odd opening credits, Barrymore does well at her first stab at directing and Whip It is a quirky film that will appeal to all. A must see for anyone who enjoyed Youth in Revolt or Juno.