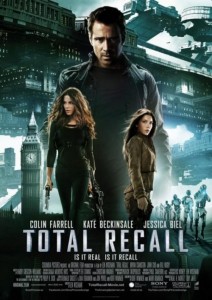 Wiseman’s revamped remake, inspired anew by Phillip K. Dick’s short story, “We Can Remember It for You Wholesale”, throws us into this frenzied and fast paced futuristic thriller. Colin Farrell replaces the legendary Arnie Schwarzenegger as Doug Quaid, a man slowly suffocating under the strain of his cripplingly mundane ‘Ground Hog Day’ existence.

In a bid to reinvigorate his dwindling life, Quaid succumbs to temptation visiting Rekall, a decidedly dubious company that claims to make dreams reality by installing false ‘fantasy memories’ into the brain. Too good to be true? Well… of course it is! The procedure goes horribly wrong and Quaid unwittingly unleashes a chain reaction that challenges the very boundaries of reality. After stunning himself by ruthlessly taking down a room of armed men -with the kick-ass-killer instinct he didn’t know he had- Quaid embarks upon a mission to unearth his true identity. The foundations of his fragile world continue to crumble, as his loving wife Lori (Kate Beckinsale) turns out to be an undercover agent, who smoulders under the sultry role of the token ‘British baddie’.

Quaid is picked up by the mysterious Melina (Jessica Biel), resistance fighter and his beautiful forgotten lover who could bare the key to his uncertain past. While attempting to recover his decimated reality, he joins her to find the leader of the underground resistance Matthias (Bill Nighy) in attempt to thwart an attempted invasion of the colony by Quaid’s former evil ally, Cohaagen (Bryan Cranston).

Upon discovering that the fate of millions lies in his shaky hands, the action accelerates as fight sequences, car chases-make that flying car chases- and explosions steeped in lashings of impressive CGI soar past at break neck speed. Questions remain unanswered and we struggle to sympathise with our Bonnie and Clyde substitutes in Biel and Farrell- who fail to ignite throughout. Cranston’s Cohaagen lacks menace, posing far too little a threat to match the sky- high stakes, rendering the supposed ‘dastardly villain’ ineffectual. Consequently, there is little to distinguish the ‘good guys from the bad’, and it is near impossible to truly champion our intended heroes. We can’t help but crave the casual charm and comic relief that Arnie brought to the original, but with enough gadgets and gizmos to give Bond a run for his money, the shoot’ em up styling certainly delivers on its own terms. This, combined with the delectable eye candy on offer will certainly wow, offering worthy commiserations for other shortcomings. Lost in a wild whirlwind of uncertainty, Wiseman’s Total Recall may not know exactly where it’s going, but the destination is nothing compared to the full-throttle journey.