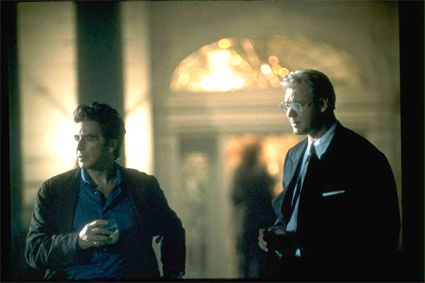 Buy The Insider (DVD) from Play.com

As typical with Michael Mann’s work, this is a serious affair straight from the start. Al Pacino plays Lowell Bergman, producer of the headline CBS News channel programme “60 Minutes” – the home of the biggest interviews.

We begin with Bergman arranging an interview with Sheikh Fadlallah, founder of Hezbollah. The interviewer, Mike Wallace is played by Christopher Plummer who does a sterling job throughout.

After Bergman is sent some confidential material about the tobacco industry he calls Jeffrey Wigand (Jeffrey Wigand) to advise him. Wigand is reluctant and Bergman senses he has a lot more to tell after being on the inside as a top bio-chemist within the company Brown & Williamson.

This is based on a true story of how Jeffrey Wigand spilled the beans on the inner working of the big 7 tobacco companies and how they tried to silence it from ever becoming made available to the public.

When it was released it received 7 Academy Award nominations which tells you there is a bit of quality here. Its a very good film and well worth checking out.

Buy The Insider (DVD) from Play.com