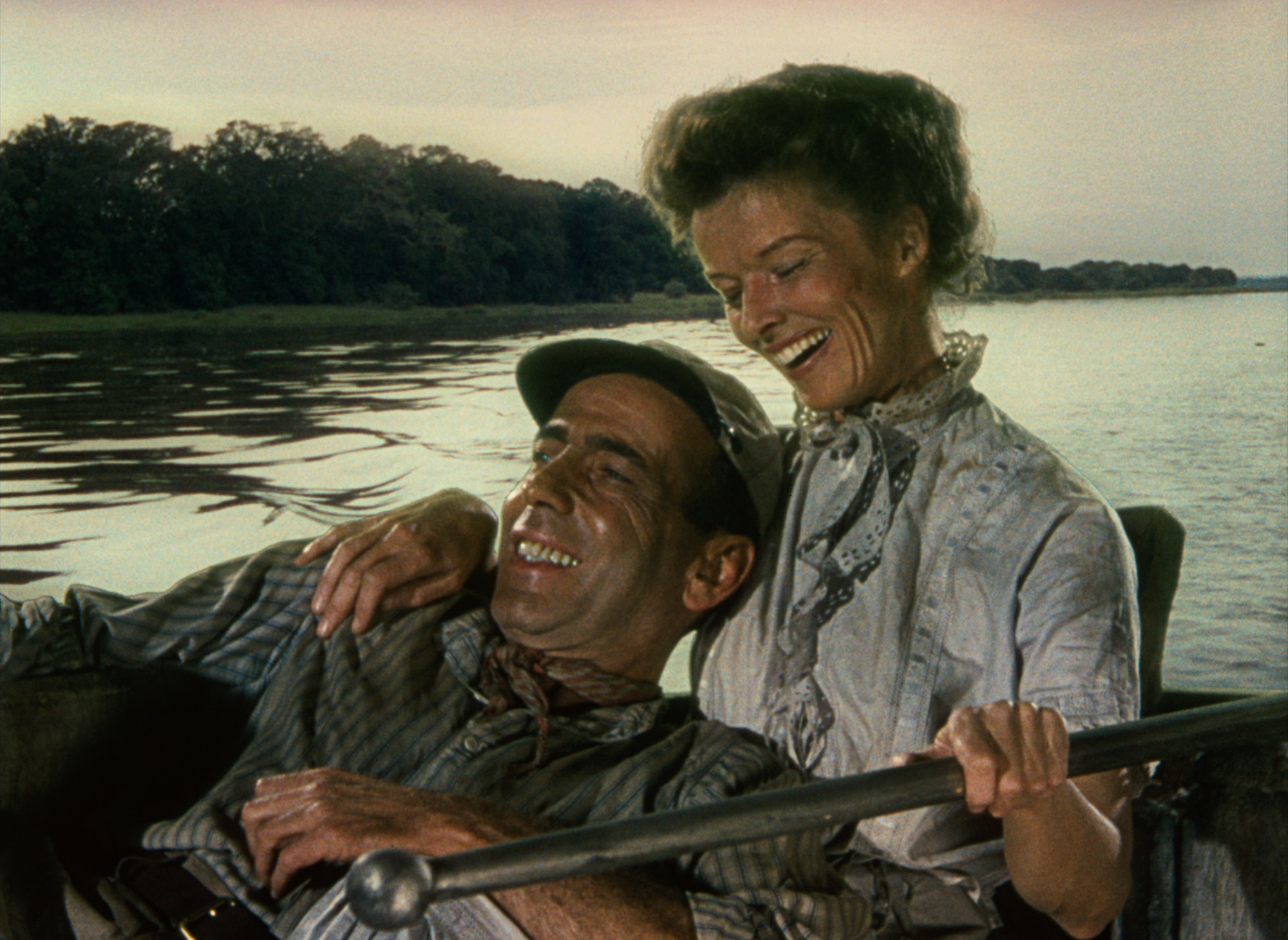 John Huston’s odd couple adventure is one of the most enduring adventure films of the golden age of Hollywood. A classic in every sense of the word, with beautiful cinematography and two winning performances at it’s centre, this is a long overdue and welcome Blu Ray release from Eureka Entertainment.

Katharine Hepburn plays Rose Sayer, the prim and proper sister of an ineffectual missionary (Robert Morley) in Africa, whose very English existence is upended following the outbreak of the First World War. When the Germans decimate her home and indirectly cause her brother’s death, her only recourse is to seek refuge with the genial but uncouth Charlie Allnut (Humphrey Bogart) aboard his tugboat, The African Queen. Charlie’s plan is to lie low on the river until the war blows over, but much to his dismay, Rose insists on doing the patriotic thing; traversing the treacherous East African river, braving the rapids and the hostile environment in an attempt to sink the German destroyer guarding the waterways. 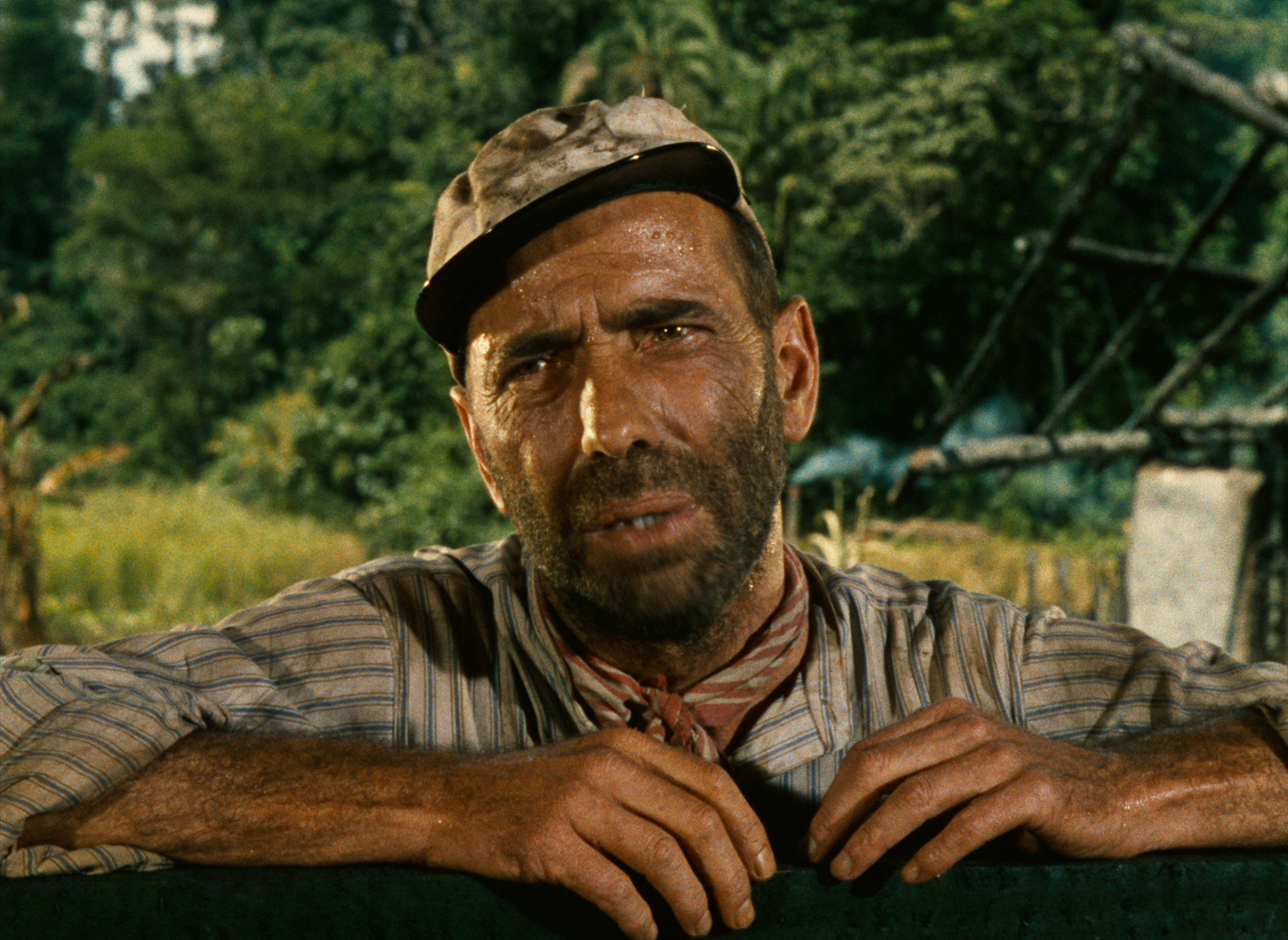 Bogart and Hepburn are an unusual pairing, and on paper it shouldn’t work, but fortunately in practice the casting is revealed as a stroke of genius. One of the most unique odd couples captured on film, Charlie’s drunkenness and Hepburn’s puritanical abstinence make for some genuinely funny moments, but crucially, the contrast between the two works because all the bickering and conflict between the two is grounded in, respectively, a very British kind of politeness from Rose, and just basic decency from Charlie. The relationship transitions from the pair hating each other into falling in love seamlessly, without ever feeling forced.

Bogart especially is very different to his previous performances, eschewing his usual calm collected demeanour for an altogether more cheerful character. Huston always brought out the best in Bogart (See also The Treasure Of The Sierra Madre) and he deserved his Oscar win for this, the only time he won the award. I think sometimes critics underestimate Bogart as an actor, maybe because it’s so easy to an impression of him. As shown here though, he was actually a very versatile actor, and never better than in his work with Huston.  The African Queen contains one of his very best, nuanced performances, even if it’s not particularly subtle. Giving an impression of cheery competence for the most part, occasionally this outward demeanour gives way to a look of apprehension as he turns away from Hepburn, which is a really nice touch, and shows how he is trying to protect her from the reality of the situation. 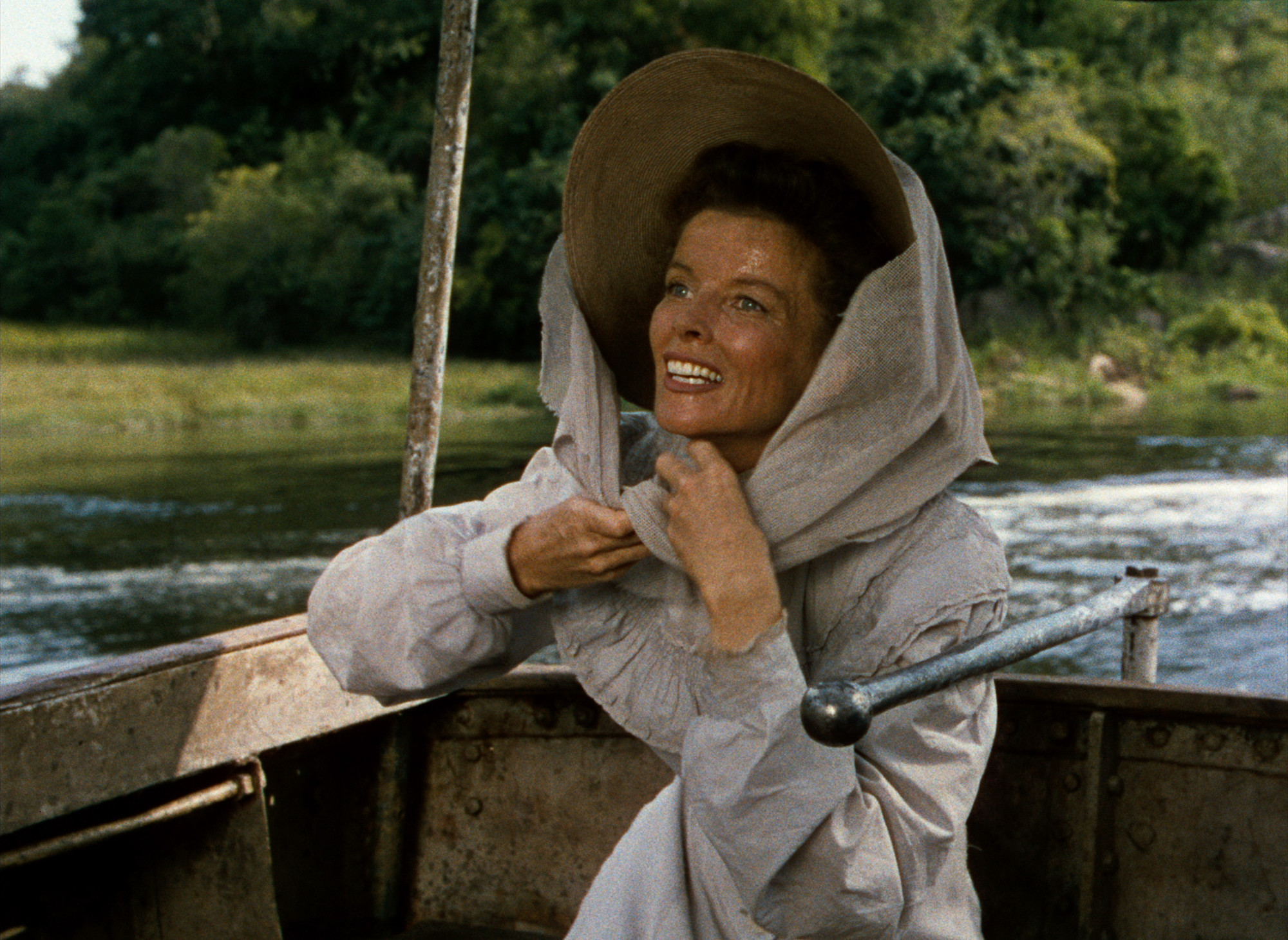 Hepburn herself, regularly cast as a proto-Manic Pixie Dream Girl in films like Bringing Up Baby, also plays against type as the initially humourless, stubborn spinster, but as she mellows a little, and begins to enjoy the excitement of the adventure, she becomes more of a relatable character. As she warms to Bogart, we warm to her, and her childlike enthusiasm for the journey is really endearing.

The film is pretty lightweight for the most part, but there are a handful of thrilling set-pieces that still work today, and some moments of real jeopardy that stick in the memory. Charlie having to pull the boat through leech infested swamp water is one of the more unpleasant moments, made all the worse by the fact that he has to get back in again and again. 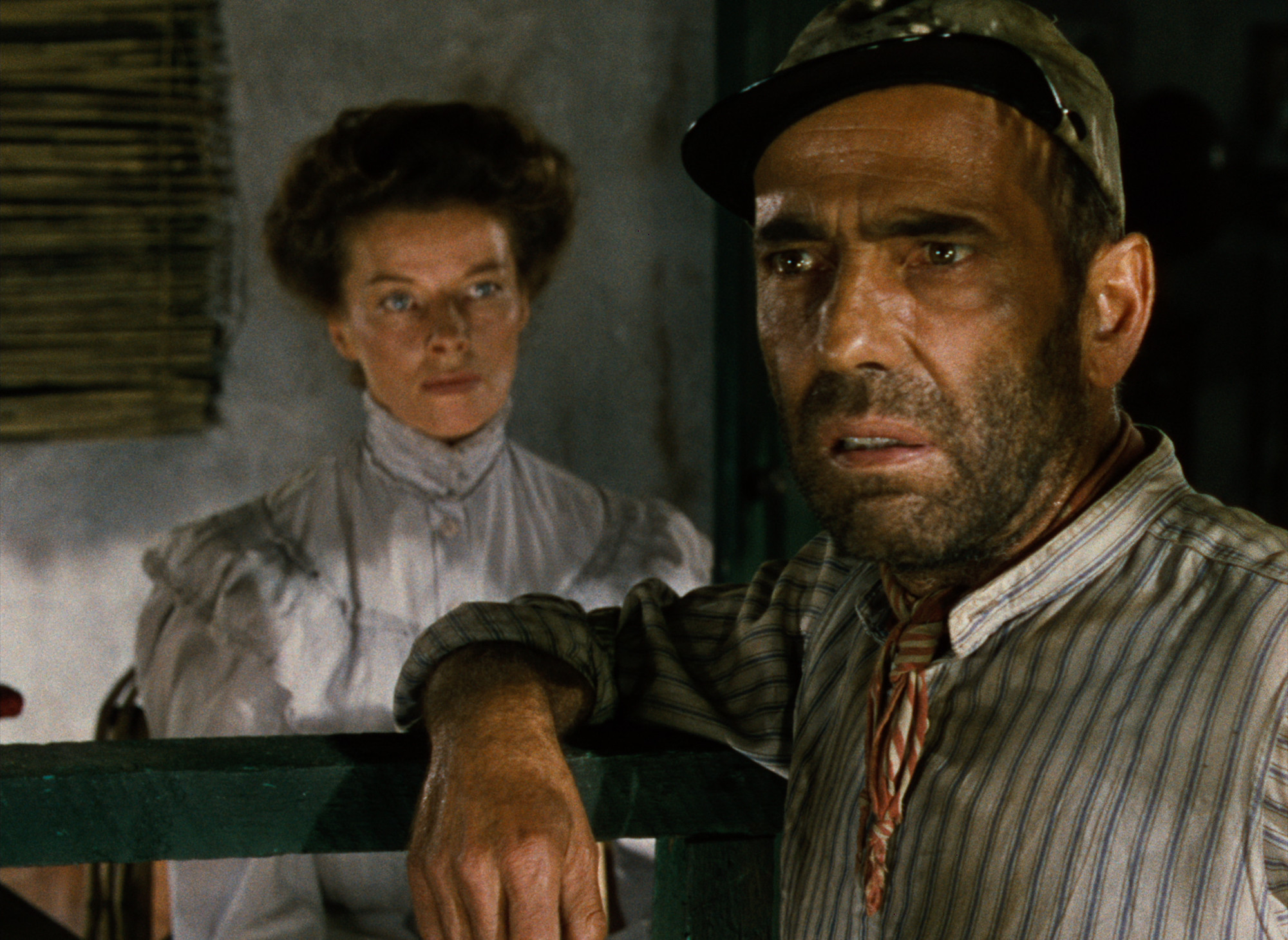 There is also some uncharacteristically picturesque cinematography on display. Huston has somehow acquired a reputation for being a slightly workmanlike director, but this is belied by the cinematography on display here; Huston was assisted by Jack Cardiff, whose work with David Lean on Lawrence Of Arabia and Bridge On The River Kwai cemented his reputation as a master of cinematography. But it’s the little touches that show Huston’s eye at work, shots such as Charlie’s entire stash of  gin bottles floating away, or the crane shot showing how close the pair are to open water just at the moment when they are about to give up. Huston is one of the all time greats, and visually at least this ranks up amongst his best work. 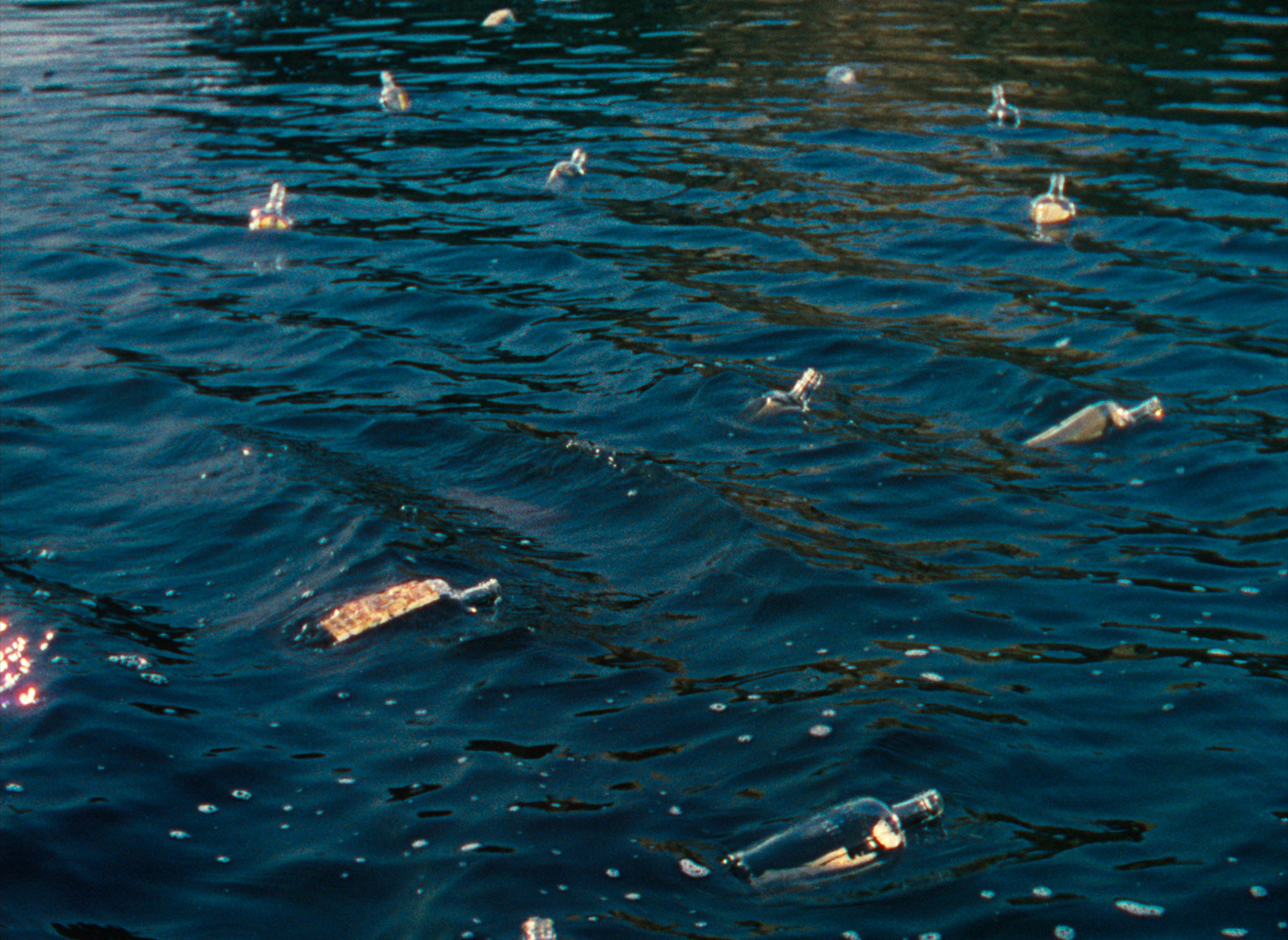 The drawback of such an excellent transfer is that some of the productions shortcomings are more glaring than usual, such as the use of doubles who look nothing like the leads, and especially egregious back projection. For the time it looks amazing though, and the real stunts, such as the trip down the rapids, still hold up today, as does the impressive nature photography.

The African Queen is quite twee and lightweight in places, but overall, it’s a touching, charming film, and a joy to watch. Some aspects of the film may have dated, but the central relationship between the two leads is still just as touching as ever. Hepburn and Bogart make a truly sweet couple with undeniable chemistry, and the evolution of their relationship is completely plausible. It’s a shame that the pair never made another film together. 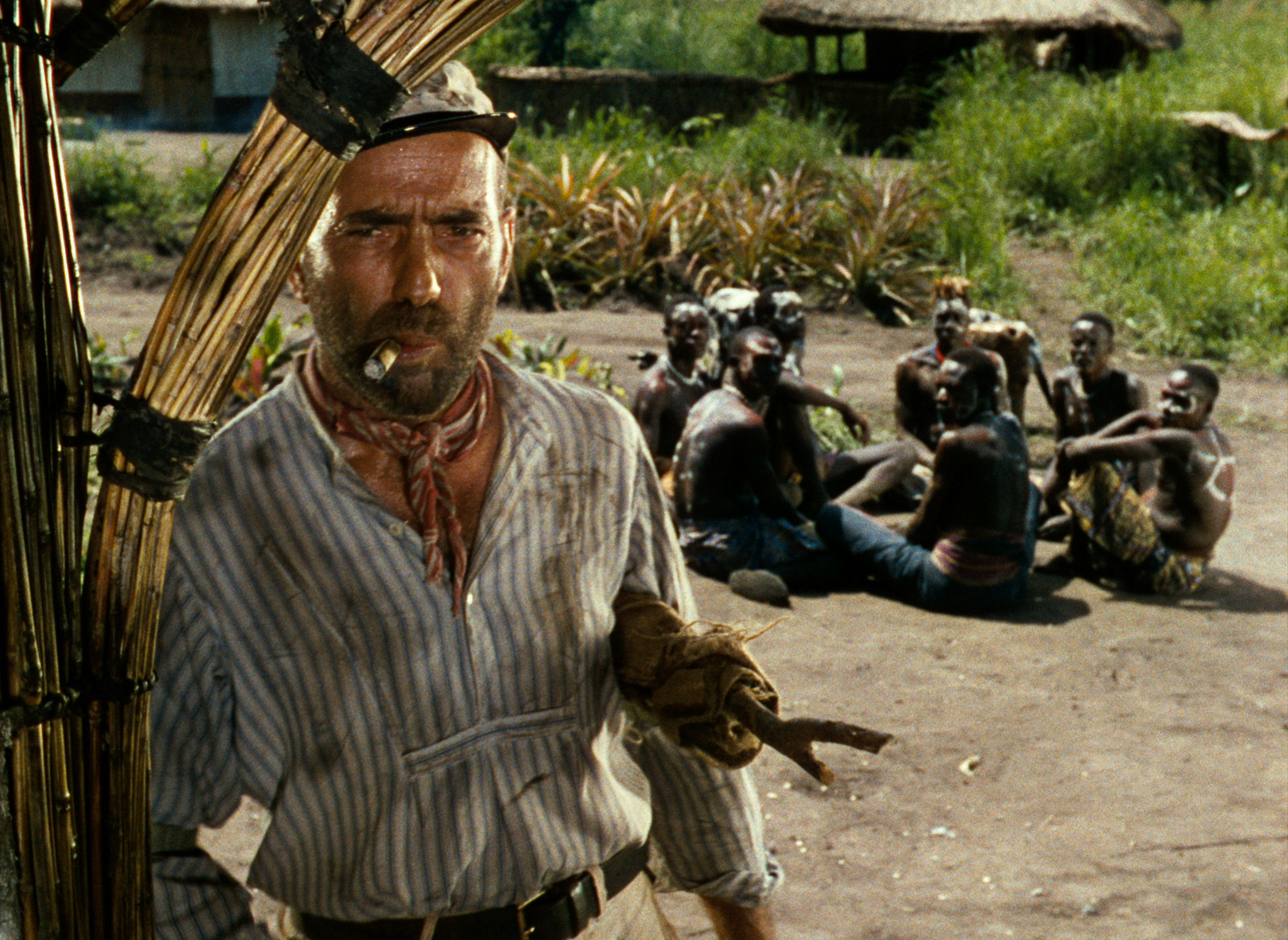 Presented in 1080p from Paramount’s 4K restoration, this comes crammed with special features. An audio commentary from legendary cinematographer Jack Cardiff. it also features new and exclusive interviews with film critics Kim Newman and Neil Sinyard. Plus Embracing Chaos: Making The African Queen – a comprehensive making of documentary that delves into all the behind the scenes material.