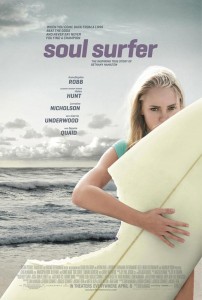 I don’t wish to take away from Bethany Hamilton, she is clearly a young woman of uncommon courage and resolve, but this film, which tells the story of her fight back from having her arm bitten off by a shark to become, once again, a champion surfer is a perfunctory, cliché ridden and often preachy rendering of a story that should be truly inspirational.

Soul Surfer has a few things going for it. The cinematography, by John R. Leonetti, who also shot Piranha 3D, is outstanding. The film conveys the natural beauty of Hawaii with some stunning landscape shots, but where it excels visually is on and in the water. The surfing sequences (doubled by Hamilton herself) are brilliantly shot. You get inside the sport and inside the wave with Bethany. Director Sean McNamara (whose last ‘effort’ was Bratz: The Movie) may have a very limited feel for drama, but he makes the surfing sequences genuinely exciting.

Soul Surfer also has a fairly decent cast. AnnaSophia Robb impressed me, and the three other people that saw it, in Bridge to Terabithia, and here she proves again to be a likeable presence. Also along for the ride, as Bethany’s parents, are Dennis Quaid and Helen Hunt, though both are better than the somewhat phoned in performances they give here.

Everyone seems to be trying hard, unfortunately they are undone by a terrible screenplay, more suited to a bad TV movie than to a cinema release. You know that saying ‘if that was in a movie I wouldn’t believe it’. Yeah, that saying exists for a reason. I’m always reminded of the scene in Ray when one of Ray Charles’ girlfriends tells him to “Hit the road Jack”, and he immediately sits down and writes that song. It may be true, but that doesn’t keep it from ringing clangingly false in the context of a movie, and that’s very much the case with many scenes in this film. In one scene Bethany, after she has decided to give up surfing and gone with her church group to help with the clean up in Thailand after the tsunami, sees a sad toddler and tries to coax him into the water, when she succeeds the whole beach bursts into applause for them. This may have happened, but that doesn’t keep it from feeling forced, false and manipulative (to say nothing of a plot convenient contrivance to get Bethany back on a surf board) in this context. The same is true of many of the character interactions, particularly between Bethany and her main surfing rival Milena Birch (played, with about as much charisma as the board she rides, by Sonya Balmores). Birch is so overly bitchy, and Bethany so smiley and sweet in return, that it just feels like a cartoon, and actually undermines the drama out on the waves.

Watching this film is often like reading a self help book. I hate self help books, they tend to be filled with empty advice; endless pages of the utterly obvious being stated, usually in a condescending manner. Bethany’s intermittent voiceover is especially grating, packed as it is with treacly, ‘life affirming’ platitudes like “Surfing isn’t the most important thing in life. Love is. I’ve had the chance to embrace more people with one arm than I ever could with two.” I know it’s well meant, but still, Nurse, the sick bag please. There is also the issue of the film being preachy in other ways. Bethany is a Christian, and her relationship with God is important to her. Fine. Depicting religion or a religious character doesn’t mean you have to adopt a preachy tone (just look at Bridge to Terabitihia, which engages with ideas of religion but without preaching or criticising). At times watching Soul Surfer can feel like being at a Christian seminar about finding yourself again after a tragedy.

There are a lot of little things that don’t work here; some odd editing that gives us a few scenes that are so brief you wonder if someone just left a stray shot in the print by accident; a veritable parade of wooden acting, notably from the teak toned Kevin Sorbo and Rip Curl product placement so pervasive that I suspect they are actually producers all got on my nerves, but the real nail in the coffin might be the very long ‘having one arm makes things hard’ montage. I get that we need to see how Bethany is challenged by her disability, but five minutes of her trying to do something before realising ‘oops, can’t do that with one arm’ is a bit much, and the confused tone of the sequence, which seems undecided as to whether it should tug your heartstrings or go for a cheap laugh, really doesn’t help.

The cast and crew have clearly entered into this film with the best intentions, but it really doesn’t come off, and that’s a shame. I’d like to see a documentary about Bethany Hamilton (this film’s end credits suggest that there is plenty of archive footage available), because this is clearly a story worth telling better than it has been told here.