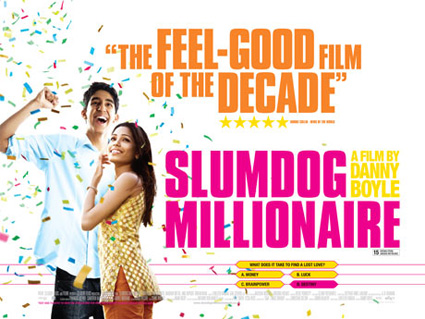 I was initially a bit sceptical about seeing this film. I thought the title itself painted too clear a picture of what was in store. I’m glad to say, i was wrong – its a very well crafted film, an education about life in India’s slums and despite its title, the plot develops with real class.

The story follows a young orphan boy who ends up starring in India’s version of ‘Who Wants To Be A Millionaire’. It is a well rounded film, with a very good script and decent performances throughout. In particular Jamal K. Malik (Dev Patel), whose only previous acting experience was playing Anwar Kharral in the TV series ‘Skins’.

Its directed by Danny Boyle who has had success with ‘Trainspotting’ and ’28 Days Later’. He is responsible for some beautifully framed shots of India alongside some very harsh images of the slums. However its all done in a very competent way and there are some very funny scenes between Jamal and the police, which break up the tension when things get a bit dark.

Its difficult to say too much about this film without giving away too much of the plot, so i’d rather not – i would simply recommend doing yourself a favour and watching it yourself.