Shes Out Of My League Film Review 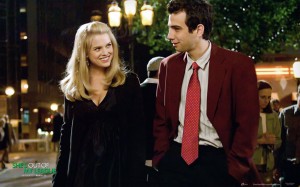 She's Out of My League: Alice Eve and Jay Baruchel

This comedy follows the story of American airport security guard Kirk (Jay Baruchel) and his romantic woes. He is still hopelessly in love with his first girlfriend Marnie (Lindsay Sloane) – who in a bizarre twist has since become accepted as one of the family by Kirk’s parents, along with her new boyfriend. Kirk is not a handsome stud, so when he meets the stunningly beautiful Molly (Alice Eve) at the airport he doesn’t think he has a chance with her. But much to his surprise she asks him out. Kirk is convinced she’s just on the rebound rather than having any real romantic interest in him, and these worries begin to tear the relationship apart.

The majority of the films gags are raunchy sex jokes, usually originating from scenes with Kirk’s laddish friends and fellow airport employees Devon (Nate Torrence) Jack (Mike Vogel) and Stainer (T.J. Miller). Although it’s not strictly a teen movie, based around twenty-something’s instead, Shes out of my League does feel very reminiscent of American Pie, from the inclusion of a character called ‘Stainer’ to a scene involving Devon shaving Kirk’s balls. However what stands the film apart from the generic teen movie is its realistic and empathetic situations and characters. There are no over exuberant plot lines or predictable clichés, and it’s easy to sympathise and identify with Kirk.

The best jokes in the film are not found in these (hit and miss) sex gags, but in some hilarious continuation gags; happily married Devon repeatedly asks Molly whether her friend Wendy (Jasika Nicole) has mentioned him after he met her at a party, and Kirks doting and overenthusiastic family are quirkily odd enough to lead the plot into some great situation jokes. The only real scene that doesn’t quite fit with the comedic plot is a laborious scene in the middle of the film, as Molly and Kirk argue over their dating scenario at length. 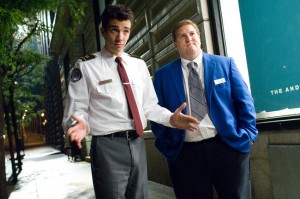 She’s Out Of My League: Jay Baruchel and Nate Torrence

Whilst Jay Baruchel is the only recognisable face from small roles in films like Knocked Up and Nick and Norah’s Infinite Playlist he does well in a leading role here, with great comic timing. However the rest of the cast is pretty forgettable, Lindsay Sloane isn’t wooden but she’s certainly nothing special either. It’s a shame that for such a big release that none of the American comedy circuit regulars show their faces even for cameos, but on the other hand the non-star cast does make the film more believable.

This rom-com is a cross between American Pie and The Terminal, and with some well written jokes is an entertaining watch. Anybody who’s a fan of Judd Apatow films like Knocked Up and Funny People will definitely enjoy this.