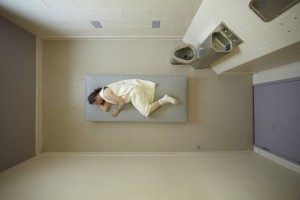 John Kastner’s documentary explores the tentative relationship between mental illness and seriously violent crimes, and focuses on one incident from 1999 in Ontario, Canada. Sean Clifton, a man suffering from severe OCD and Schizophrenia, stabbed 22 year old Julie Bouvier outside a shopping centre when he was in a delusional state. He stabbed her six times, just missing her heart and spine, after hearing voices in his head telling him to stab the prettiest woman that he saw. Miraculously, she survived and talks about her experience in the film with her face partially hidden. We also hear Sean’s version of events and gradually build a sense of who he is, both from him from those who know him. We get a sense this is a self-aware, lucid and gentle man who is simply very ill. One doctor at the facility claimed him to be one of the ‘sickest patients he had ever seen’. The film reserves judgement, and in fact has a sympathetic tone, which will be widely felt by the audience.

The Canadian Mental Disorder Defence protects those that are not deemed to be responsible for the crimes they have committed due to the severity of their illness. Rather than sent to a prison, Sean was sent to the Forensic Brockville Mental Facility, a place where murders and violence happen regularly, a place where ‘you wouldn’t bring your mother’ according to a staff member. When he arrived, Sean was vacant and unresponsive, too involved with his own mind to really connect with reality. It has taken eight years for him to be released from the facility and live in shared accommodation. His problems with OCD would make him repeat mundane tasks, he would struggle to use cutlery and walk across a road, trying to do so for hours on end until it felt right. He has improved drastically and is now pushing for total freedom, which means there would be no law to force him to take his medication, even though he insists he will take it for the rest of his life.

Throughout the film Sean’s confidence in front of the camera improves and we build a deeper understanding of how his illness compelled him to do what he did, and the sense of regret that he feels. It was an entirely random attack, and he has shown no sign of a violent disposition since. The local police were shocked to discover what had happened, as although familiar with his strange behaviour, they never imagined he would resort to such an act. After so many years and with the help of a nurse, Sean has managed to construct a letter of apology to Julie which she reads out and openly accepts in the film. Although kind and understanding of his reasons, she doesn’t feel ready to accept his apology in person. The most poignant part of the film is at the end, when photographic stills are shown of Sean shaking hands with Julie’s parents, who have been willing to meet and forgive him. In another, whilst the crew are filming Sean buying a coffee and sitting at a table, a woman strikes up a conversation with him and asks for his autograph.

The story is compelling and the alternative study of an attempted murder is thoughtful, yet the film was let down in parts by the incongruity of its style. In the opening for example, we see Sean with mangled hair, stepping on and off the pavement. There is a blue filter, dramatic music and voiceovers from the victim and her family recalling the events. Later in the film we watch Sean staring at a clock, whilst hearing him in a voiceover talk about the fear that led him to do so, until it felt right that he could stop  and leave the room. We also see him slide a tray in and out of its holder. It could have been that this had been filmed before his improvements, but it seems unlikely as it feels staged. It comes across as both a visual filler and a way of making Sean into a spectacle, like something off a sensationalist late night television documentary. Even if this was a genuine performance, it seems unnecessary as we do not need to see the evidence, just hearing it first hand is the important part. The approach jars with the rest of the film, which is interested in and respectful of giving him a voice.

In addition to Sean, we also learn about his friend and housemate who suffers from delusions and believes the police want to harm him. It would have been all the more interesting if, whilst keeping Sean as the main study, we learnt about several other cases at the facility to consider in relation to the issues of decreased punishment that the documentary discusses. Some patients who had killed their children would only be kept inside for two to three years. It’s a fascinating subject. Although the film is about one crime, the questions it provokes are relevant on a wider scale. Despite its flaws however, Not Criminally Responsible is worth a watch for the story itself, and it leaves scope for the viewer to make their own assumptions about the content.