Sheffield Doc/Fest On Tour: We Are Poets 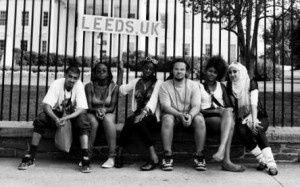 Opening with a slow-motion montage celebrating the everyday in Leeds, We Are Poets is a well-assembled, energetic and often hair-raising documentary chronicling the participation of a group of young poets representing the UK at the annual international poetry slam competition, Brave New Voices, in Washington, D.C. in 2008. The film won the Youth Jury Award at this year’s Sheffield Doc/Fest, and is screening at selected cinemas as part of the festival’s national tour.

Directed by Sheffield-based filmmakers Alex Ramseyer-Bache and Daniel Lucchesi, We Are Poets clocks in at a swift and healthy 80 minutes, and it’s to the credit of its makers that, in narrative terms, things are kept simple: we are introduced to the six young teenage protagonists we will follow individually as they are selected by their mentor at Leeds Young Authors, Khadijah Ibrahim; thereafter, we follow them through a period of preparation and tutoring, before seeing in the second half of the film how they fare at the competition itself.

Remarkably forthright, these teenagers are immediately likeable in their lack of pretension and the lyrical talent they display. As team captain Saju Ahmed notes in his introductory segment that his potential as a poet developed in spite of a troubled schooling, the film in general shows the importance of companies such as Leeds Young Authors, in – as LYA’s own website states – providing “spaces in a socially and economically disadvantaged area to celebrate youth voices”.

Without making an issue of its implied relationship between racial oppression and economic hardship, the film carries sincerity and positivity throughout; like the poetry slam competition that comprises much of We Are Poets, the point here is to hand the stage to the poets themselves, as they engage with an ancient art form in new and exciting ways – itself, for many of them, an achievement – sharing their lives with endless courage and commitment. Crucially, it also doubles as an accessible viewing experience to which other youths may relate.

There’s a genuine sense of anticipation as the youths arrive in Washington D.C. for the Brave New Voices competition. Because we’ve seen only snippets of the LYA’s prowess amidst scenes of otherwise faltering confidence, a brief montage of some of the American performers hints at the formidability of the task facing the UK performers. Like some self-conscious nod to British inhibition, the film mirrors and directs its viewers’ sense of overawe at some of the talent on display.

But, as selective footage of the slam poems shows, those repping “Leeds, UK” bring their own characteristics and voices to the stage, holding their own against “opposition” varying from the lyrically dexterous to the orally overpowering. Opposition’s the wrong word, though: throughout each performance, poets receive verbal endorsement, and at the end of each the applause is resounding, making the poems resemble political speeches or rallying cries enacted by self-articulating young people acknowledging their own collective confidence- and identity-building.

One of the more rapturous applauses follows an LYA double team effort of a poem called “America”; that they’d been discouraged from performing this poem earlier in the film by a politically sensitive coach makes its explicit acceptance by everyone else in the room – all Americans – all the more endearing. That scene, leading as it does into a montage of young creative people of all racial backgrounds performing for performing’s sake, makes clear that when a potentially controversial and alienating idea is delivered heartfelt and truthfully enough, its political power becomes encompassing and empowering.

The October 20 screening of We Are Poets at Newcastle’s Tyneside Cinema was followed by a short Q & A with Saju Ahmed, whose brief insights into both the film’s production and the further achievements of Young Leeds Authors were insightful, and whose closing performance of self-written poem “Freedom” had the audience enthralled.

The same screening was preceded by a short documentary called Eighty Eight. Directed by Seb Feehan and Josh Bramford and produced by Hannah Bone – all of Newport Film School – the short follows 88-year-old widower Ralph Settle as he spends his days playing music on the streets of Cornwall. Shot mostly in close-up and making much use of focus pulls in HD, it’s one of those “character studies” that make a virtue of their subject’s eccentricities, with a vague sentimentality lingering over its eleven minute duration. It won the Student Doc Award at this year’s Sheffield Doc/Fest.