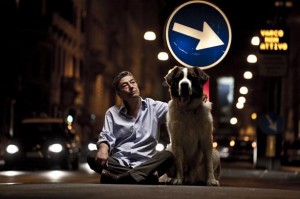 Pleasant but not saccharine, Italian film Salt of Life (Gianni e le donne) is a sensitive character study of Gianni (Gianni Di Gregorio), a man whose involuntary retirement has resulted in a barely suppressed ennui and anxiety toward his shifting self-perceptions of masculinity, age and the difficulties of supporting a family on a limited pension.

Directed and co-written with Valerio Attanasio by star Gianni Di Gregorio (2008’s Mid-August Lunch), Salt of Life‘s dramatic material emerges from astute comedy set against a subtly depicted social fabric. Fifty-something Gianni provides the narrative with its observational framework; his upheld, gentlemanly exterior in dealing with his spoilt, woman-of-privilege mother (Valeria De Franciscis) allows us to see her implicit thiftiness and exploitation of Gianni (taken almost as her age- and class-earned prerogative) before he himself confronts her about it.

Likewise, just as his mother’s skewed financial priorities are exposed by the multiple shelves of €150 bottles of wine in her fridge, one ponders the extent of Gianni’s awareness of how others take him for granted, as he drunkenly indulges Kristina (Kristina Cepraga), his mother’s beautiful housekeeper, as she obliviously boasts of a generous pay rise and the designer clothes bought for her. To its credit, the script doesn’t shy away from such awkward moments; the same scene ends with Kristina shrugging off Gianni’s attempted shift from fatherly ear to would-be seducer. Di Gregorio (who was one of the six writers on 2008’s Gomorrah) and Attanasio are well aware that flaws as well as virtues make for rich characterisation, and that good comedy as much as drama relies on this tension.

In fact, the film is full of such tensions. Gianni himself, on the threshold of a retirement thrown upon him, lives with the wife from whom he is separated and the daughter whose live-in boyfriend completes a functioningly dysfunctional domestic picture. Left with a to-do list from his wife (“buy curtains from Ikea” is a recurring, never-done task in the film), Gianni finds himself sitting at the breakfast table with his daughter’s lover Michelangelo (Michelangelo Ciminale); the latter’s entrance hints at the boorish, but Ciminale’s performance is a sympathetic one, and his confession to an inquistive Gianni that “there are no jobs out there; even people with a degree in Economics or Law can’t find one” lends a poignancy to an inter-generational, collective suffering in the wake of another global economic crisis.

Aesthetically, too, there’s a duality present, not only in the decision to name characters after the actors playing them, but in the contrast between close-quarter, location-shot conversations in roaming handheld, and the precise, symbolic framing seen in montage sequences, where Gianni forever walks in the opposite direction of younger women who no longer look at him with the sexual desire they presumably once did.

The film’s makers have chosen to make a comedy concerning contemporary petty bourgeois life in Rome, and have followed through with a warmth and sensitivity as well as a charm. The acting is excellent; 95-year-old Valeria De Franciscis is particularly strong opposite Di Gregorio’s own rewarding performance, and the supporting cast is fine – even the more superficial and one-dimensional female characters have a certain naturalism to them.

Toward the end of the film, Gianni unwittingly takes an hallucinogenic before walking his neighbour’s dog to the local shop. The subsequent trip sees him disoriented by a capital city whose lights blur into a haze before and around him; as the dog watches on, he finally finds much apparent happiness in walking through a modern fountain in the centre of Rome. The scene both recalls and subverts the iconic sequence in Fellini’s La dolce vita (1960), in which Anita Ekberg summoned Marcello Mastroianni in the Trevi Fountain. Indeed, “the sweet life” led by Gianni doesn’t seem too far removed from that of Fellini’s younger protagonist. In the 50 years between the two films, the world has become even more contradictory and confusing as a backdrop; and Salt of Life manages to capture this even as it foregrounds the more personal anxieties of a male coming-of-old age.

‘Salt of Life’ is released on August 12.