Retreat (Carl Tibbets) is a film which feels like it may have been written 2 years ago, but has since dropped into irrelevance. Unfortunately it is also entirely predictable to anyone who has seen more than one horror film before.

Retreat follows Martin (Cillian Murphy) and Kate (Thandi Newton) who have absconded to an isolated island in an attempt to save their marriage, when Jack (Jamie Bell) is found badly injured on the island the couple take him in, after he awakes he tells them he is in the military and that there is a fatal flu pandemic and that they must not leave the island, or the house.

Retreat would have been relevant during the height of the swine flu panics, or the bird flu panics before that, unfortunately for this film, panics like that live short in the memory, and that leaves Retreat in obscurity. It also feels like it was once a much longer film than its 82 minute release length, and it was forcibly cut down in an attempt to keep the audience interested for the entirety of the film. The plot is filled with clichés and the dialogue is lazy, which is unfortunate because both Thandi Newton and Cillian Murphy are very talented actors who are given next to nothing to work with, which leaves their performances in limbo. Jamie Bell’s character, Jack, is the only one with any depth, and whilst Bell does his best to make Jack threatening, he just comes off as an annoying and inconsiderate house guest for the majority of the film. 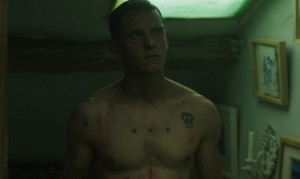 The score also falls into the cliché of thriller-horrors, using the same techniques to heighten tension, and similar operatic styles to convey emotion, it leads to further predictability, and whilst the final shots are accompanied by loud operatic music usually associated with a heroic end, but is then abruptly stopped, is another technique that is overused in this genre.

Overall the film seems to borrow from many horror/thriller genre films, it uses much of the same technique and ideas, all this cliché is not helped by poor ‘stock’ characters, and in a film where only three characters are introduced, this is a major failing. Retreat is a film which may be enjoyed casually by someone who has never seen a horror film before, but for everyone else this is not worth the 82-minute running time.