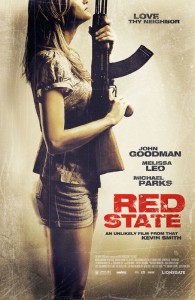 Without a doubt Red State is the most interesting effort from Smith in years, but weighing it up against Cop Out and Zak and Miri that seems far less of an achievement. Sadly despite being full of good ideas, this horror/thriller misses its mark.

The main issue with Red State is its complete lack of consistency. What starts off as a comedy, jolts into horror territory before turning into a crime thriller and finally becomes a Coen Brothers farce. The fast moving plot makes it difficult to become attached to any of the characters and Smith seems to fill any awkward gaps with potty humour as if he has run out of ideas. As a result it becomes difficult to understand what Smith is trying to convey.  At times one wonders if Red State would have worked better as a six part television series, where a lot of the characters could’ve been fleshed out and the issues raised would’ve been fully explored.

Visually, it seems like Smith has finally discovered handheld camerawork and uses it gratuitously to make up for lost time. Although it is nice to see the director move away from his usual very bland style, Red State uses so many different camera techniques that the end result is very choppy. 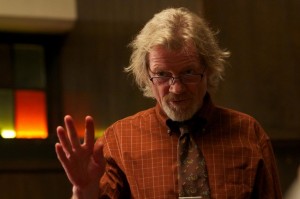 Despite these faults Red State has several great moments and some fantastic performances especially in the form of Michael Park’s Preacher who is both chilling and charismatic. His early monologue is captivating and certainly is one of the film’s finer moments. John Goodman is also on form as ATF Agent Joseph Keenan bringing a lot of humour and perhaps being the only likeable character within the running time.

Overall Red State is a very interesting film filled with great concepts and startling images, but fails to work as a whole. What could have been a truly scathing exploration of religion, terrorism and the Government seems to be little more than just disappointingly mediocre.