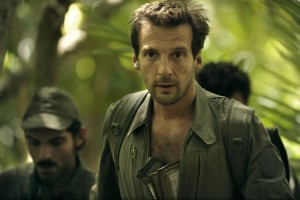 Mathieu Kassovitz earned a reputation as an auteur for directing the contemporary French classic La Haine (1995), which provided a refreshing change to the chain of French movies that had preceded it and provided a unique and daring social commentary of police brutality. Of course, he is also instantly recognizable as Nino Quincampoix, the eccentric love interest in the quirky romantic comedy Amélie (2001). After a stint in making more mainstream Hollywood movies, he is back to his natural roots with the controversial Rebellion (L’ordre et la morale), a project which took him ten years to make. He has co-produced, co-written, co-edited in addition to starring in it and directing it.

As a director, Kassovitz seems to feel a certain responsibility to use the medium of cinema to inform and expose, to explore issues that would be avoided entirely otherwise. Rebellion is similar to La Haine in the sense it has been made with similar passion and extensive research, but whilst the latter depicts the chaotic clash of authority between police and lower-class individuals in the ‘banlieues’ outside of Paris, the former uncovers the French government’s brutal treatment of a hostage crisis that happened in 1988. An alternative perspective of the events is given, rather than the one that has been told previously.

Kassovitz adopts the central role as Phillipe Legorjus, the captain and negotiator of a counter-terrorism police unit sent in to settle the conflict on the island of Ouvéa in the French colony of New Caledonia. Kanek activists had seized a police post and 30 hostages in an attempt to gain independence. The film closely documents Legorjus’ gruelling efforts to communicate with the activists, and his ongoing dialogue with Kanek leader Alponse Dianou (Ibabe Lapacas). Legorjus’ work has to come to abrupt halt when he receives orders to abandon peaceful communication from Paris, as presidential elections are imminent and the government are concerned about appearing weak.

Although the performances are convincing and the drama well traversed, the film is not overly concerned with these aspects; the thoughtful message and tragic reality behind them is what dominates. Likewise, the violence exists to enlighten the viewer and provoke thought rather than exist for its own sake as a spectacle. The stylistic tropes feel far more Hollywood-like than in La Haine. The non-diagetic, threatening drum beats feel a bit unnecessary at times as the story itself is gripping enough without requiring such tropes to build tension. The climax also takes a while to be reached, however the finale skillfully resonates a powerfully subtle sadness. Rebellion delicately represents a brutal part of French history and reflects on how politics often reigns over moral integrity and compassion.