American Samoa is not known for their football prowess, in fact quite the opposite, renowned for their 31-0 loss against Australia, and their position in Fifa’s world ranking. Dead last out of 207 teams, without a single win to their name. How does it feel to know that you are the worst in the world at something? It is this question that Mike Brett and Steve Jamison’s (not to be confused with Steve James of Hoop Dreams fame) underdog documentary, Next Goal Wins, tries to answer, but the result isn’t always satisfactory.

The film itself follows American Samoa in their preparations for the 2014 World Cup Qualifiers, under new Dutch coach Thomas Rongen. Rongen seems like a character taken straight out of a Underdog Sports Drama. A real Gordon Bombay figure, Rongen starts out hard nosed and with a furious passion for results, but ends up a valued member of the team and a true friend.Or at least, that is how the narrative presents it to us. This is Next Goal Wins greatest folly, it seems to seek the comparison of an underdog film at every turn. Whilst it is obviously satisfying to see the team not used to succeeding, win, I couldn’t help but feel the most interesting aspect of the film had been lost in favour of creating yet another underdog sports movie. Don’t get me wrong, I love to see the little guy fight back as much as the next man, but there are plenty of films that do this better (See Undefeated, Remember The Titans, The Mighty Ducks 1-3).

What Next Goal Wins had, that these other films didn’t, was the opportunity to truly explore what it meant to know you were the 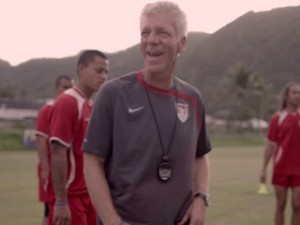 worst, to have lost 31-0 against Australia (comparitive underdogs themselves) and to go on after that representing your country, carrying that reputation with you. Next Goal Wins, at times, does begin to scrape the surface of this, mostly when talking to Nicky Salapu, the team’s goalkeeper during the imfamous Australia game. Salapu is an endearing character who shrugs of his title as the holder of the record for conceding the most goals in a single match, at one point wishing he could play Australia again and lose to them 10-0 just so it was slightly better than last time. Salapu’s responses are never particularly deep, and it feels that perhaps the documentarians didn’t push hard enough for a real response, and as such Salapu’s true feelings and motivations (he comes out of retirement to play again) feel as though they are left unheard.

The film’s most interesting character is Jaiyah Saelua, a Fa’afafine player. Fa’afafine is American Samoa’s third gender and means way of the woman. Jaiyah is both a beautiful woman and a strong male football player, who over the course of the film becomes the first Transgender person to play in a World Cup Qualifier. Jaiyah’s story felt like it could’ve been a film in itself, and I was shocked that I hadn’t heard about her before considering that I follow football quite closely and it was only recently that she made her debut. It struck me as the sort of sporting first that would be widely celebrated, further showcasing equality through football, but even in the film this achievement is downplayed massively. This only works in its favour though, seeing how accepted Jaiyah and the concept of Fa’afafine are in American Samoa, it makes you wonder how that in our country and hundreds of other countries still haven’t achieved acceptance, or even recognition. There is definitely a lesson to be learned from the people of American Samoa, but it is not the job of Mike Brett and Steve Jamison to teach you this, so as such they just present it as it happens, as opposed to painting it as out of the ordinary. 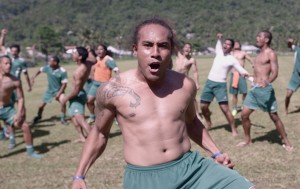 Whilst I won’t tell you how American Samoa fair in the films finale at the world cup quailifiers, what I can tell you is that the documentarys finale is exciting and wonderfully entertaining. People in my cinema couldn’t contain their gasping, and at one moment Rick Edwards of Tool Academy fame let out a rather loud OOOSH (Football Fan Tool?), but this is the magic of the underdog sports film, even the worst ones are good in the final fight/game/match, and Next Goal Wins is far from one of the worst ones and should guarantee that you will leave the cinema with a smile on your face, but that being said it wasn’t what I was expecting when I went in.