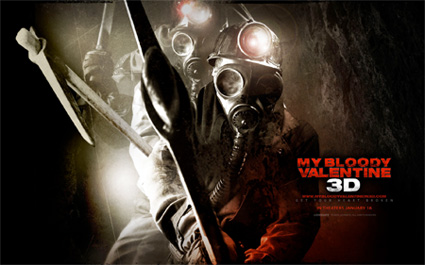 This is a remake of the classic My Bloody Valentine made in 1981. This time around it was developed with the latest 3D film techniques for the ultimate cinematic experience! Now there are released to buy there is also a 2D version out on DVD and Blu Ray.

It follows a pretty predictable plot from the beginning, but you don’t really watch these types of films for their plot. Its all about the scare factor, and this one doesn’t disappoint. There has been a real increase in the number of these slasher type films in recent years and this is most certainly one of the better ones. It owes a lot to previous films such as ‘Friday the 13th’, ‘Scream’ and ‘I Know What You Did Last Summer’.

The film is set in the mining town of Harmony and begins with a drilling accident in one of the mines where six people become trapped. There’s only one survivor who is alive but is now comatose. On Valentines Day the sole survivor awakes and the mayhem continues where it left off. There are a few twists and turns to look forward to and some great pick axe-tion.