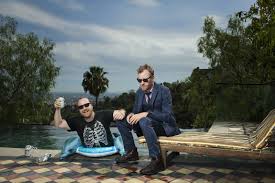 “Do you have…a plan…for this film?” asks Matt Berninger, lead singer of The National, of his younger brother Tom at the beginning of Mistaken for Strangers. The answer, which becomes apparent over the next 75 minutes, appears to be: to an extent.

Rather than being a film about The National, Mistaken for Strangers is one about Tom, its director, and his relationship with Matt, who invites him to join the band on tour in 2010. Tom is there primarily as a member of the crew but takes the opportunity to make a film with their – guarded – co-operation.

The brothers are not close – the clue is in the title, the name of a track from the band’s 2007 album Boxer – and we get flashes of exasperation, and tenderness, from Matt at various stages when confronted by Tom’s perceived inadequacies. More often than not it is him minding Tom rather than the other way round; perhaps this is self-critical editing on Tom’s part, though the band and crew members are also listed as producers.

When speaking with the band one-to-one Tom’s line of questioning is wilfully daft. Do the band take their wallets, with ID, on stage with them? This quickly grates as the film seems to be searching for form but more engaging moments come, such as when Tom hears a story of how Matt once snapped at the band during recording.

Live performances are covered briefly, with the film far more concerned with what happens backstage. The band – but not Tom – meet Barack Obama, and various celebrities appear at shows. What comes across is the routine and lack of glamour on tour, though one sequence neatly paints the contrast between superstar Matt – having gone into an elated crowd to continue singing Mr November – and Tom, backstage, alone.

This is no hagiography like last year’s Stone Roses documentary Made of Stone – Tom doesn’t offer much of an opinion on the band’s music and Matt doesn’t appear to know whether he likes them when he asks him along.

Instead, Tom carves a ragged structure for the film by obsessing over its construction. We see crew get annoyed at him getting in the way with his camera and then, with the on-tour filming done, he covers walls with a Post-it notes while working out which scenes to keep and how to present them. At times, it seems he’s dubiously making a virtue of his failure to organise the material; alternatively, he could have had a plan to make the most meta documentary possible from the outset.

Whatever the case, Tom’s enforced departure from the tour turns out to be the best thing for both him and the film. At this point a shift in tone is signalled with Matt becoming unwitting narrator, telling his audience before another song: “This is where is becomes more depressing”. But when Tom returns home to interview his parents it becomes more touching, and, by finishing with a scene from a gig he ends the film closer to his brother than he started, leaving us on a cautiously optimistic – even tender – note.

Mistaken for Strangers will be released in cinemas from 27 June 2014, with a special screening and live satellite Q & A in 50+ cinemas on Saturday 14 June