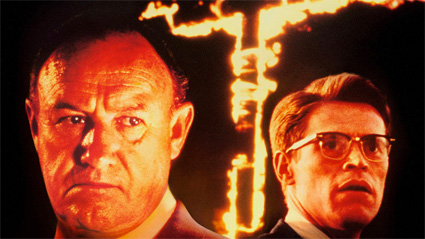 Set in a small town in the American deep south, ruled unofficially by the Ku Klux Klan, 2 civil rights protestors are murdered.

The FBI decide its time to send their agents in. Enter Agent Rupert Anderson (Gene Hackman) and Agent Alan Ward (Willem Dafoe). They are initially met with walls of silence and a deep suspicion from the locals. Its not long before start to slip up and fingers start getting pointed at those responsible. But can they prove it?

The 2 FBI agents are brilliantly cast. They work perfectly together – the young pup, straight out of a textbook and the ex-sheriff. There different methods are used and exploited to expose the people running things behind the scenes. The grand wizards of the KKK.

Its a difficult subject to cover, but Alan Parker does a great job. Its similar in topic to ‘A Time to Kill’ with Samuel L Jackson, which i found a bit boring as most of it is based in the courtroom. Not so with Mississippi Burning – this film is much more on the front line and is all the better for it. A harsh story well told.