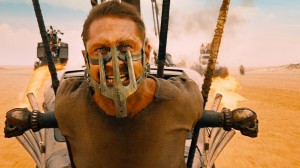 Mad Max Fury Road – a film where you won’t want to blink or breathe in case you miss something. A film so exciting, it’s almost arousing; so brutal and grotesque, it’s a glory to behold; so energetic your heart beats to the drum of adrenaline. It’s an absolute visual masterpiece of a ride and I can’t wait to see it again.

George Miller is back directing the latest in the franchise that seemed a little off-key in 1979 though hugely successful. Mel Gibson was the madman himself, traipsing around the desert furiously seeking revenge against the bikers of the not-too-distant dystopian future where oil is a precious commodity spent on rough and ready fuel guzzling motorcycles.  In the much more distant future Tom Hardy is Max, spending most of the first half of the film in a metal muzzle (think Bane but less British and more violent) growling his grievances at the white faced, hairless, boil and scar covered  yet still somehow attractive, Nux (Nicholas Hoult). The illustriously intense Charlize Theron is the heroine Furiosa to Hoult’s anti-hero, rescuing the five model wives of the monstrous Immortan Joe who rules over the precious commodity of this movie – water.

In a nutshell, this film would break out of the nutshell in a haze of steel, sand and explosions before the audience had time to reflect on the shell.  Six women, a half life and a Mad Max take on all the tyrannous armies of the desert, warts (literally) and all as they seek the “Green Place” of Furiosa’s dreams, though nothing is ever as simple as that with unexpected deaths and plot twists that kick up the dust some more.  Even the manic War Boy Nux becomes a pillar of morality despite spending most of his time trying to get to Valhalla in a ball of martyr flames – I guess a hot woman making eyes will do that to a man. Tom Hardy is an absolute dream as Max (as well as being an absolute dream full stop) bringing humour to the violence as any actor who has given such choreography would have to. He does it with a particular nonchalance even when he’s being flung around by a chain connected to the back of his head, whilst trying desperately not to be shot, or hanging upside down from the War Rig while revving cars, with horrendously rusty spikes decorating the hood, approach with aplomb.

The girls are the killer talent here though. Model Rosie Huntington-Whitely is the formidable and pregnant Amazonian favourite of the wives, The Splendid, 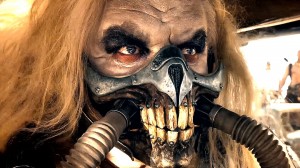 who complains a little too much about a teeny scratch from a bullet while everyone else is being face planted into the sand, but is admirable all the same. Lenny’s daughter, Zoe Kravitz, was my favourite wife Toast, sassy and particularly good at reloading a gun, adding intrigue to a pretty face. Charlize Theron as the Imperator Furiosa is the Queen of this film, driving the plot with her heroics and leading the band of rebels from start to finish –the film may be called Mad Max and his madness is ever apparent, but it’s ferocity is forever Furiosa’s.

I’m not sure I can really express how much the new Mad Max will blow your mind all over row 8; the film is so savage that the trademark white sails of the Sydney Opera House would come crashing down as they are swept away by the tide of Fury Road. Go see it as it deserves to be seen – on a big screen in a dark room and LOUD. 3D glasses optional but encouraged