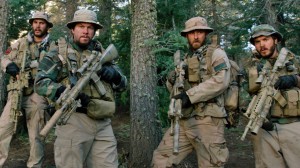 “You’re never out of the fight,” Marcus Luttrell (Mark Wahlberg) reminds his remaining comrades deep into their deathly confrontation with Taliban members in the Afghan mountains. An audience is bound to understand, and not just emotionally – the technical design of Lone Survivor is such that the observer experiences every crash, crack and impact inflicted upon the troupe of four SEAL members when they were discovered spying on Taliban leader Ahmad Shahd. The spoilers are in the title, but also in the real-life tale the story is taken from – on June 28, 2005, mission Operation Red Wings sent Lieutenant Michael T. Murphy (Taylor Kitsch) and his team to capture or kill the notorious Shahd, but they are discovered and ruthlessly shot back across the mountains, members slowly succumbing to the intensity of the battle, leaving only Luttrell to be retrieved.

So Lone Survivor isn’t concerned with surprises or tension in the traditional way a film like this would be expected to. Instead, it’s about the traumatic experience of wartime – but this is where Lone Survivor misses the mark. There’s no ambiguity in the presentation of the events – such is the fear, it seems, of disrespecting the memories of these men and the feelings of their families, that writer-director Peter Berg confuses men and mission. The men were brave to the last, a band strewn apart only by the sheer intensity and number of the Taliban fighters, but their mission was not necessarily of the same standard. The presentation of the Afghan people is far too simplistically done – subtitles only accompany their words when Berg feels like it, which isn’t very often. Taliban members are evil, Afghan villagers are saintly, and a little Afghan boy is a manic pixie dream child whose silence and wide eyes guide Luttrell to safety.

Wahlberg’s earnest masculinity folds all too easily into this mould, and unfortunately, it’s his dogmatic righteousness that the film takes alone through the final act of the film. Much more appealing are the sharp youthfulness of Emile Hirsch, as Danny, and better still, the unassuming magnetism of Kitsch, finally mining the soft charisma of an actor whose career has struggled to find a foothold since the end of Friday Night Lights. Along with Ben Foster as Axe, these four actors dominate the film – with occasional returns to the base, anchored by Eric Bana’s Lieutenant Commander and the bashful Second Class Officer Shane Patton (Alexander Ludwig), whose initiation into the battalion is the focus of the film’s bright opening act.

While the camaraderie and fierce loyalty of the central foursome does sustain the film for a while, it’s the technical prowess that makes the film worth experiencing, if you don’t mind being assaulted with you’re at the cinema. The sound is designed impeccably to register every harsh noise – as the men retreat backward, there are a lot of suicidal rolls down harsh mountain terrain to add to all the bullets whipping about. While Berg is all too keen on a little slow-motion showcase of the landscape, it’s a key emphasis on the beauty of the vistas that is twisted by the battle favouring the locals familiar with the intricacies of the forest and the uneven rocks of the terrain. For a film whose conclusion is foretold, the amount of tension wrought in Lone Survivor makes it a worthy visceral experience – it’s just a shame that leaves it no time to think about what’s happening.

LONE SURVIVOR is in cinemas from Friday 31 January.