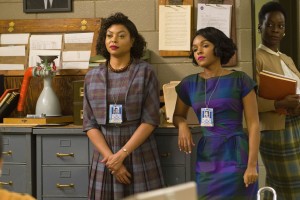 ‘Every time we get a chance to get ahead, they move the finish line’. The word ‘progress’ is brandished around consistently, as the representation of women along with their achievements within their respective fields and society as a whole seemingly remains downplayed still in the year 2017.

Ask Her More campaigns, as Hollywood actresses lament sexist and superficial approaches when gracing the red carpet, craving a sharper focus on the merits of their work which are regularly overlooked by reporters. Talk of glass ceilings being shattered in volatile election campaigns, as certain politicians look to encourage the next generation of ambitious females. Here’s looking at you Hillary. Charting the remarkable careers of three African-American women as they fought fierce oppression and segregation, Hidden Figures’ ‘ascend into outer space’ true story couldn’t be more timely.

The 1960’s. A decade that bared witness to a fiercely contested space race. United States Of America V Russia. Kevin Costner’s tough talking boss Al Harrison fears a reputation tarnished and an ego bruised by finishing second place, as he laments the growing incompetence and failings of his NASA colleagues, with Jim Parsons’ mathematician Paul Stafford bearing the brunt.

For all the sprawling ambition possessed by many of those at the Langley base, the talented trio of Taraji P. Henson’s Katherine Johnson, Janelle Monae’s Mary Jackson and Octavia Spencer’s Dorothy Vaughan remain constricted by their far from subtle job title as ‘coloured computers’. Whilst appreciative of being doting wives and loving mothers at home, it’s a trajectory they are reluctant to be truly defined by. Given a chance to make a mark on history as astronaut John Glenn (Glen Powell) states his intent to be the first American to orbit the Earth as part of the Friendship Seven, they look to provide the mathematics that ultimately make this audacious mission soar in the wake of such technological advancements. 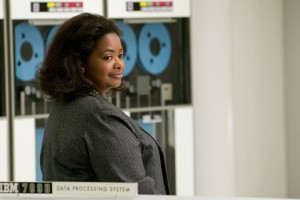 Marking the debut of Theodore Melfi, the rigid narrative structure and traditional themes of Hidden Figures on first reflection could easily be disregarded as run-of-the-mill ‘made for TV’ fare. Yet rather like its key protagonists, it consistently possesses a wonderful tendency of going beyond what is expected of it.

Mandy Walker’s crisp and richly textured cinematography compliments the steady, immaculate observations of Melfi without glossing over the hardships, relying on the telling looks and figure movements of his ensemble to convey their frustrations from a distance, without an intrusive directorial approach potentially diminishing the film’s clear intent. Whilst the score from music heavyweight Pharrell Williams (also on producer duty here) captures the period effectively, brimming with personality with the upbeat soul of ‘Runnin a worthy mention. But it’s the stellar cast that truly elevate Hidden Figures into crowd-pleasing territory.

Taraji P.Henson’s Katherine may be initially lumbered with the repetition of a particular struggle that is woven into the script, but her challenging of protocols and warped ideals in a male-dominated profession is superbly realised, giving the sequences she shares with Costner’s Harrison and Parsons’ Stafford (both terrific) real emotional heft. Constantly challenged and undermined by Kirsten Dunst’s stern supervisor whom is oblivious to the verbal bile she spouts, Octavia Spencer’s Dorothy looks to prove her worth in stoic fashion as the sass of Janelle Monae’s Mary arguably steals the show, with one particular ‘night classes’ courtroom speech she’s armed with a captivating highlight.

Occasionally heavy in exposition but always compelling, whilst serving as a wise reminder that for all the film’s optimism, we still have obstacles to overcome in modern society. Hidden Figures is an empowering triumph with an astonishing story at its core.