Glasgow Film Festival is in full flow at the moment, with an array of big gala premieres, Scottish curiosities and hot from Cannes world cinema making for a diverse, eclectic fortnight with far too much for one person to see. Nevertheless, I’ve managed to catch a few films here and there, and the quality has been of a ridiculously high standard. Here’s a roundup of what I’ve seen so far.

The We and The I
Michel Gondry’s latest film is so good it deserves its own review, so expect that soon enough. It played at the tail end of the Glasgow Youth Film Festival, which preceded the event proper, and it’s fitting that it did, as this is very much a story about youth and a disaffected generation who talk a lot but don’t say all that much. The set up is remarkably simple for those familiar with Gondry’s other work (Eternal Sunshine of the Spotless Mind and The Science of Sleep are the highlights), as it merely concerns a bus load of Bronx school kids travelling home on their final day before the summer holidays. The camera moves around the bus, catching glimpses of the myriad conversations taking place.

The vast majority of the action is confined to the bus, occasionally leaving it for surreal flights of fancy and grainy, mobile phone recorded footage of life for the youths outside of school. By restraining himself with his more bizarre flourishes, the abstract moments are lent a greater power, but it also means that enough time is given to the conversations on the bus. Gondry finds beauty in the banality, and where he really succeeds is in making each character, however small their role, rounded human beings. A warm, compassionate, intelligent film and Gondry’s best since Eternal Sunshine.

Populaire
The opening gala film was a delightful French comedy about a woman who becomes a secretary for a handsome, chauvinistic businessman and enters the world of competitive speed typing. Kitsch colours and off beat period details make this a visual marvel, and the central relationship is sweet, if rather predictable. What really makes this worth watching, however, are the scenes of typing that are lent a ridiculous intensity by the screaming crowds of fans and some sharp direction from debut director Regis Roinsard. It’s as light and fluffy as candy floss, but the journey to liberation that both characters undergo, and one of the most bizarre sporting contests in cinema history, make this an utterly charming film.
Populaire is released on 30th May 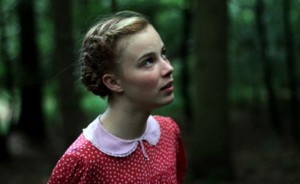 This harrowing film about survival in the wake of World War II is given an extra depth and complexity by the fact that it is set in Germany. Lore’s father is a high ranking Nazi and is, we presume by the hasty burning of folders on eugenics, involved in some of the barbaric experimentation that went on under the Third Reich. When they leave their five children to cross Germany to find their grandparents, it is Lore who must shoulder responsibility, something made increasingly difficult by her burgeoning sexuality and the emotional turmoil that comes with the end of an ideology. Lore is put through crisis after crisis, and director Cate Shortland is unflinching in portraying the grim state of the nation in the wake of Hitler’s demise. What anchors the film, however, is newcomer Saskia Rosendahl’s mesmerising performance in the title role. Capturing all the conflict, both inner and outer, in her wonderful, affective face, Rosendahl gives the film its powerful, moving centre.
Lore is out on general release this week.

After Lucia
Another immensely difficult film to watch with a stunning central performance from a young actress, After Lucia tells the story of a girl who, after a mistake on a drunken night with friends, gets systematically bullied with escalating levels of humiliation, building up to a horrific finale. It’s thoroughly unpleasant to experience, as Tessa Ia acts with such conviction that it’s often difficult to remember you are watching a work of fiction. It’s a technically brilliant film, with long takes and a distant camera putting the audience in the place of a voyeur, but it is not something you will want to watch more than once.

Caesar Must Die
A group of prison inmates put on a production of Shakespeare’s Julius Caesar, and the film follows their progress through rehearsals right up until production day. Such a premise means that this is an inherently performance based film. However, by choosing to use real prisoners and shooting in an unobtrusive style, the Taviani brothers make this an utterly compelling drama that could easily be a documentary. In fact, I’m still not 100% sure it wasn’t. Julius Caesar also proves to be the perfect play for the inmates to perform, the themes of treachery, murder and brotherhood taking on new significance for the convicted criminals. This is intelligent, gripping cinema and one of the most visually impressive films of the year so far.
Caesar Must Die is released on 1st March 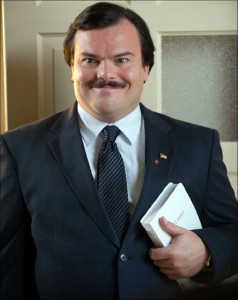 Richard Linklater’s latest film is a curious blend of real life testimony and comic re-enactment about the eponymous undertaker; a man loved by everyone in the town but who, one day, murders a cantankerous old widow he has befriended. Playing Bernie is Jack Black, retaining only small shreds of his usual OTT schtick and instead reigning it in for an acutely observed performance of tiny gestures and warm smiles. Whilst Shirley Maclaine and Matthew McConaughey provide excellent support, this is Black’s film, his posture, voice and movement totally transformed to play this part. It’s a remarkable performance, and it perfectly complements the disconcerting, hilarious accounts from real townspeople who knew and loved Bernie. It’s a strange, funny film and oddly thought provoking. How much are people prepared to forgive, especially when it’s someone nice that needs forgiveness?
Bernie has been out in the US forever, should be coming out in the UK on 26th April

Wadjda
The first film from Saudi Arabia is an event. That the first film from Saudi Arabia is directed by a woman is miraculous. That this very same film, from Saudi Arabia and directed by a woman, is all at once moving, understated, beautiful, human and compassionate makes it the most important, vital and refreshing film of the year. No need to read a plot synopsis or reviews, just fall in love with this subtle, beautifully acted tale of a girl who wants to buy a bike. The word unmissable is thrown around a lot, but I can’t think of a film from the last 5 years that has been more deserving of that accolade.
Wadjda is out on 2nd August.