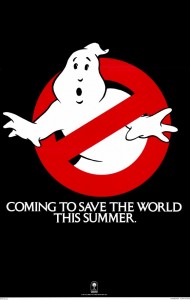 I was three when Ghostbusters arrived at cinemas in 1984, and about seven when I first saw it on video. Since then I’ve seen it probably more than fifty times. Now, 27 years after its intital release, Park Circus are bringing a remastered Ghostbusters back to cinemas, where two generations who have never seen it projected can finally share this great movie with an audience.

The remaster looks pretty spectacular. There is definitely some very evident grain in the picture, but actually that’s welcome as far as I’m concerned, as it means that the film still has something of a filmic appearance rather than the overly cleaned, very digital, look some films can get to through this process. While the picture looks great the excellence of the clean up does reveal some cracks in the effects, notably, early in the film, I could clearly see a car on the street through a superimposed gargoyle, but if a few FX inconsistencies can mess up this film for you then, frankly, you’re missing the point.

Ghostbusters is, minute for minute, one of the funniest films I’ve ever seen. Barely 30 seconds of screentime ever goes by without a really funny line, my personal favourite is a whispered aside that most people miss, as Dan Ayckroyd says “Listen, you smell something?”, but if you’ve seen the film before you surely have your own. Most of the funniest stuff goes to Bill Murray as Peter Venkman; the deadpan dry wit of the team (Co-screen writer Ayckroyd said that his Ray Stantz is the heart of the Ghostbusters, Harold Ramis’ Egon Spengler the brains and Murray’s Venkman the mouth). Murray is the first of the stars that we meet – as Venkman manipulates an experiment in psychic ability to hit on a student – and from that moment on he owns the character and the movie, so much so that it is impossible to imagine what the film would be had John Belushi, who had been due to play Venkman, lived. Murray’s delivery makes every gag feel off the cuff, and he raises his acting game around Sigourney Weaver (who plays the Ghostbusters’ first big client and his love interest) to the degree that, while it’s not the centre of the film, the incipient relationship works well.

The rest of the cast are equally well placed in their roles. Ayckroyd is great as the driving force behind the team, handling exposition about the science well, but also delivering gags and that all important sense of childlike wonder at the supernatural side of the story (always amusingly undercut by Murray). Ramis and his very tall hair make for a wonderfully odd character as Egon; the nerd of the Ghostbusters (“I collect spores, moulds and fungus”), Ramis is an undervalued comic, and he’s hilarious here, particularly in Egon’s interactions with receptionist Janine (Annie Potts) and later with Rick Moranis as Louis; Sigourney Weaver’s possessed neighbour. For her part, Weaver, a great dramatic actress, adds a layer of reality to what is an outlandish film (the plot has what is basically a doorway to hell turning up in her fridge), bringing the first half down to Earth and making for a compellingly sexy ‘villain’ towards the end. Perhaps the sole real misstep when it comes to the cast is the underusing of Ernie Hudson, who largely becomes a prop to talk exposition at, though he does score with a couple of really great lines (“That’s a big twinkie”).

The look of the film isn’t the usual sort of heavily processed thing we’ve become used to seeing in blockbusters, indeed production designer John DeCuir revels in gothic imagery, while cinematographer László Kovács gives us a real looking New York for the supernatural events to occur in. Okay, the matte paintings are obvious now, but the rest of the design remains amazing. From the costumes, to the props (the proton packs are wonderfully detailed) to the designs of the ghosts themselves – especially the iconic and hysterically funny image of the Stay Puft Marshmallow Man – everything comes together to make this world balance the real and the silly just enough that we can go along with the story. Until Mr Stay Puft shows up the ending is a bit anti climactic (I always wish they had used Sigourney Weaver rather than a nameless Sheena Easton lookalike as the first incarnation of the film’s ‘big bad’), but that’s a nitpick.

Ghostbusters, for me, holds up just about perfectly. It’s a classic comedy, with jokes that rely on wordplay and character interaction rather than pop culture references for their laughs, and so it has barley aged on those terms. The cast are great, and Ivan Reitman keeps jokes and plot flowing with expert balance. I highly recommend that if you’ve never seen this film projected you do so as soon as possible.