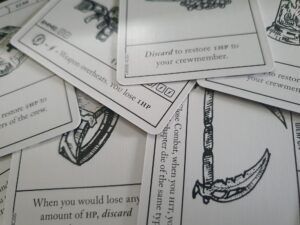 We would like to thank THEMEBOURNE for their donation to St Thomas Hospital.

In space, no one can hear you scream but everyone can hear you roll dice and scheme. We all know the story of space being the dark, unrepentant darkness and us trapped in it but here you have a few friends to help you out in this coldly hostile void. That is the gist of Themebourne 2nd entry in to the ESCAPE series, ESCAPE THE DARK SECTOR. You are trapped in space, on a station deep in enemy territory. You have space monsters, rouge villains, nasty soldiers and a final boss that has a taste for blood. It might be the chiaroscuro aesthetic, it might be the classic co op mechanics that we have seen before but we are very excited. 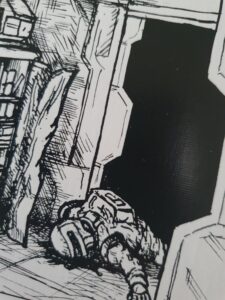 The box is littered with bits and bobs. Lots of cards. Lovely, thick, shiny cards. Lovely illustrated cards that made me reminisce about the great Fighting Fantasy books of the past. Alex Crispin take a long and extended bow indeed. There are a lot of cards for a card playing game in truth but it is necessary. 48 chapter cards, 28 item cards, 6 cybernetics cards, 6 character cards, 5 boss cards, 3 starting cards, 2 tactical action cards, 2 epilogue cards. How can so many cards look, so good? I mean it has to be criminal. They translate the mood of the game and set up the premise with such definition that you will be impressed. Then you get Dice. Lots of dice. Lots of heavy, solid dice in black and white. 35 dice in all. 4 Hit, 6 Crew, 2 Explosive, 7 Energy, 7 Ballistic. A medical record pad and 4 pencils. Oh and a rule book. A very detailed rule book that sucks some of the fun of the game out of it. Sadly. We were very lucky and received 4 crew playmats (these are very nice but not essential) and a mission playmat. This is essential and I can only say if you buy the game, invest in this. Or both. The former is helpful, the latter is well priced and makes the game, so much more interactive. 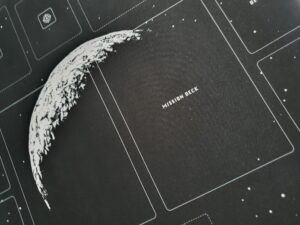 Before I begin, the rules get this perfectly. The set up that is. Not a lot else. So split the cards up into the respective sets. Time to get the chapter cards ready first. Shuffle the boss cards and draw one. That goes at the bottom. Then take the cards with three white dots on their back, shuffle and draw four, same for two dots and one dots. That is the chapters done. Now the the start cards. Shuffle and draw one. This will be your first turned over card. Now you need to place the player cards. Choose a player character and take their dice. Choose (we drew) a Cybernautics card. These are little benefits to play. Shuffle the item deck. Sort the dice into their piles. Chapter cards take the most room and are used the most. We did as the rules suggested as it is the most coherent. Place combat cards. These are best to keep near the revealed cards in truth. They are placed flank bottom and tactical action on top. Final three things. One, put those epilogue cards in their place at the top of the board. Two, each player takes a medical report card and starts with 12 Health Points, three all characters choose gear from the beginning cards. These are a weapon… TO THE GAME. 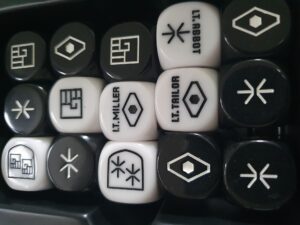 Gameplay is simple enough but made less so by the introduction of certain, extra elements. You need to choose who is the lead for each card (we floated responsibility per turn to the person on the left.  Turn over the chapter cards (these were the start card and those with one, two and three dots), they are immersive chapter cards and set the scene. You are given a scenario and have to discuss what you do, fight an opponent or lose /benefit from something. Players making decisions about what to do each chapter before using a combination of dice and item cards to complete the task before them. Now there is a lot to know here and we don’t want to lose you.  Roll chapter dice in battles, with your gear add or subtraction to combat. You can flank, ranged fight (i.e. fight before the opponent is close to you) and you work along to the end. The goal of the game is to complete every chapter, and then defeat the final boss. To win, you must keep each member of the crew alive; if any player is killed, the game ends immediately! 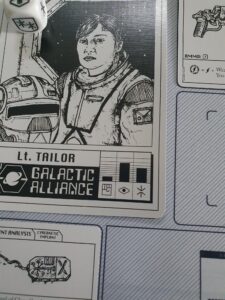 ESCAPE THE DARK SECTOR is best seen as a storybook experience. One that benefits from immersive play. No dropping in and out, just really diving into it. The work done to establish the story deserves this. Also the work in allowing that world encasing it, to take on such a strikingly genre tone, is amazing. Some complained that the original game was overly simplistic mechanically and they were wrong. This has ironed out that for those obsessed by doing even more, often for less. And still managed to enhance the experience of world building.

The rules. The extra rules. The written translation of the rules. All of this fails in its task. I found them clunky and misshapen. We played it some 6 times and though enjoyed the embrace of the game, the battles become treks through the swamp of game play. You are pulled out. Disengaged. Dulled. Sadly I hated it and found no joy from it. Then I watched an online play through. Well worked, simply explained and coherent. God love them! 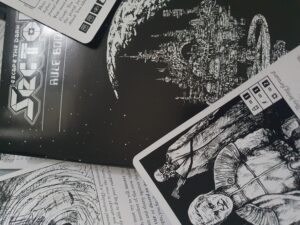 ESCAPE THE DARK SECTOR is like a familiar voyage, through lost worlds and sci fi realms. Transporting us to the fringes of science fiction effortlessly. Co op dice rolling has never been so much fun, nor so richly immersive. Every turn of the card reveals another fantastical being, another involved scene or just a guns blazing, team take down of psychotic robotics. Great fun from the first to last chapter!