Edinburgh Int’l Film Festival 2013: For Those in Peril 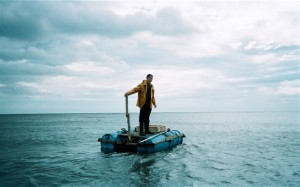 For better or worse, Ben Wheatley’s legacy begins. Not that Wheatley, whose films so far I haven’t particularly enjoyed, could have made For Those in Peril. This is much worse. Its persistent shallow-focus and hearts-on-sleeves poetic razzmatazz will win over anyone hoping to see a wholesale transferral of the more debased trends of Britain’s small-screen aesthetic to its cinema. Here, in writer-director Paul Wright’s debut feature, drama exists somewhere between narrated slow-motioned misery and an implausibly sparse setting that doubles as a symbolic backdrop for the protagonist’s isolation and gradual drift into all-out hallucinatory catharsis. A word from the outset, then: as is often the case, none of this is the actors’ faults.

Teenager Aaron (George MacKay) is the sole survivor of a shipping accident that took the lives of five other men, one of whom was his older brother Michael (Jordan Young). Consequently, he takes the magnified brunt of his Aberdeenshire village’s palpable hostility. Over faux archive images of an untarnished community (though Aaron is the child of a single parent), we hear documentary-style testimonies from the locals, one of whom sums up the general vibe: “There’s been a baad accident heah, and Aaron’s just a remindah, aal the time.”

In the prolonged fallout of such a traumatic experience, and unable to recall the accident itself, Aaron becomes fixated by the idea that since Michael’s body was never recovered, he must still be alive. Firstly attempting to retain an emotional proximity with Michael’s fiancée Jane (Nichola Burley), he begins to invest his energies in retrieving his brother, falling into an imaginary space inspired by local folklore and childhood stories – told by his mother Cathy (Kate Dickie) – about a devil in (i.e., equatable to) the sea.

This is a broken Britain, one in which community amounts to very little. Suspicions are rife, hostilities are sharp, and nobody acts like people do. Symbolism might be the desired effect, but Wright gives us so little to go at that it’s difficult to see what’s symbolising what. It can’t possibly be a character study, since the social fabric – from which psychological plausibility always stems – is nearly non-existent. And it isn’t a convincing social portrait in the first place because one never really buys into the idea that a village with such necessarily close-knit working relations and a presumably long history of maritime mishaps could turn so terribly on one of its youth.

When Aaron tries to speak to a fella who turns out to be the father of one of the victims of the accident he survived, for instance, we wonder how it’s possible firstly that Aaron didn’t know the family connection (as the scene makes out), and secondly why the fella’s such a prick about it. One scene in which Aaron is confronted by Jane’s dad (Michael Smiley) is especially and unaccountably unpleasant; you wonder if it was included just to have Smiley do that menacing shtick he does so well.

Fine-tuning his own brand of pornographic miserablism, Wright splices in Super-8 footage of Michael and Jane and of Michael and Aaron, all smiles and in-the-moment joy defined by jump-cuts and a lo-fi texture that screams nostalgia. Cinematographer Benjamin Kracun is made to shoot the present-day scenes with shoulder-mounted shakes, in nautical greys and with what appears at this point to be an unavoidably Malickian sensibility. In one scene, Aaron discovers a yellow life jacket by the shoreline, and is framed against the sun, his face and upper body suddenly but all-too-self-consciously rendered a silhouette against its relentless light. Ditch the narration about cutting his brother out of the devil’s belly, and it could be an outtake from a Visit Scotland campaign ad.

Indeed, perhaps most irritating is the film’s whispering voiceover, addressed by Aaron to Michael as if his older brother were still alive. The first such instance unfolds thus: “I just really miss you, you know? We all just really miss you.” Later, speaking of Jane, Aaron chimes, “She loved you more than all the beauty in the world.” Forget for a moment that the line doesn’t make any sense whichever way you read it. More problematic is the fact that this is just the sort of milieu in which nobody could have ever seen a Terrence Malick film, let alone found the confidence to express their traumas so directly. In aesthetic terms such frankness appears to be ostentation. In emotional terms, it’s frankly embarrassing.

Because it never occurred to any of the filmmakers that the central ideas here weren’t any good, For Those in Peril’s self-seriousness becomes unbearably stretched long before the film enters its final third, in which Cathy reluctantly sings a karaoke tune in the local. To be precise, she gives a rendition of “The First Time Ever I Saw Your Face”, chosen by somebody else – a dreadful prank if ever there was one. During her performance, of course, no sound can be heard other than Cathy’s obviously beautiful voice – even though until that point the sound design suggested a bustling atmosphere. But what else would we expect from a film that has such little regard for its communal fabric?