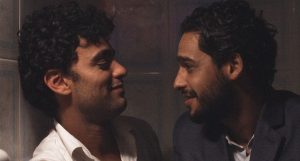 The free screening for this outdoor screening in Old Spitalfields Market wasn’t as packed as it could’ve been, which is a shame because the selection of shorts on show were a great and insightful introduction into world queer cinema. These are films shot in places where being openly gay could still cost you your life, or increase your risk of harassment, isolation and exploitation as these enthralling but sometimes harrowing films show. I’ll put it down to the cold weather  (emergency blankets were  in fact  handed out halfway through).

Many of the films explore a loose connection to the theme of borders and the transgression of those borders whether through the characters sexuality or through the country’s physical borders (the personal is political and vice versa), as in the case of the moving documentary Thin Green Line (Marios Psarras) where the Greek Cypriots still clash with the Turkish Cypriots. Here the first-person stories narrated show conflicted people not only having to deal with the secrecy of their sexuality, but also the difficulties of falling in love with the supposed  cultural ‘enemies from the other side. There is no happy ending in films like this, only people surviving in the best way they can, but sometimes that’s the reality and it’s one we need to see.

Another documentary in the selection An Iraqi Bellydancer (Juan David) introduced us the harsh reality of being gay in a country, Iraq, where you could be subject to the death penalty and  get routinely harassed and beaten up if suspected of being gay. The subject of the film, Hakim, is an eloquently engaging narrator who describes his life trying to be himself but not being able to as a kind of living hell. A hell where his uncle breaks his legs and teeth for dancing and he used to ‘cry all the time’, or where his gay friends are forced to live the double life of an adulterous married man. His life as a refugee in Greece only serves to compound his sense of isolation and imprisonment, surviving on UN handouts not able to be a true working citizen and looked down upon even by fellow refugees. As he says sadly he doesn’t know whether people want to harass because he’s gay or a refugee. His words ‘I thought everyone believed in humanity’, are an poignant reminder that till every queer  person and refugee in the world gains their rights the good fight must continue.

Other films of note continued on the theme of showing us the harsh realities, award-winning documentary The Streets Are Ours: Two Lives Cross In Karachi (Michelle Fiordaliso) told the important story of the late great gay Pakistani activist Sabeen Mahmud, founder of one of Karachi’s most liberal and inclusive performance space T2F. Mahmud was a courageously out woman who enabled American-Pakistani actress Fawzia Mirza to perform her one woman show about coming out as gay all around Pakistan. A true pioneer and hero who must’ve known she was risking her life to fight for the rights of people to be themselves, but who did it anyway. We need to keep hearing about activists like this and honoring their legacy, without this film I would’ve never known who she was and how important she was to the queer community in Pakistan.

On the fictional side the films that stood out were Weird Times (Mehmet Emrah) and the longer short film When You Hear the Bells (Chabname Zariab). The former set in Istanbul shows the violent and risky life of a transvestite prostitute surviving on the margins and has an unexpected twist that is emotionally quote powerful. The latter shows great promise in filmmaker Chabname Zariab, who manages to have the audience completely engrossed in his Afghan tale of young male dancers, trained and exploited by a sleazy old man to dance for a lecherous, paying crowd of older men. By the end you are really invested in the central characters (entrancing perfomances by Shafiq Ahmed Ali and child actor Arya Vossoughi) and genuinely concerned about their ambiguous fate.

Putting aside the fact that I sadly  couldn’t see Le Convive due to technical issues (I hope to see it at the next New Queer Visions screening), overall this was a great selection then from promising new talent exploring stories in under represented parts of the world that needed to be told. A powerful reminder that the fight for human rights globally is far from over.

When You Hear the Bells
Chabname Zariab | France, Afghanistan | 25min