Deforestation is worrying threat to our ecosystem and something which people like Bruce Parry have documented well.

Its impact on native tribes, who are often killed for their land, and the world at large cannot be underestimated. And this insightful documentary goes some way further into showing the bureaucratic realities of trying to stop the devastation that’s being caused by insatiable greed and political corruption.

The film focuses on The Paraguayan Chaco one of the world’s last virgin frontiers, and plays out like a thriller or a Western.  A battle being staged between protagonist and filmmaker Daniele Incalcaterra and the cattle barons, principally Tranquillo Favero the richest most powerful man in the area, who want to use the 12,355 acres of land that Daniele has inherited for profit. But which Daniele just wants to give back to the indigenous people, the Nandeva people. 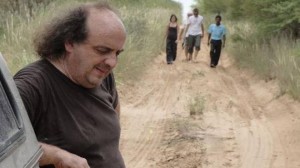 Incalcaterra very quickly realises that just giving the land back to the  native  people is only going to lead the land being taken over by the  cattle barons. So with his trusty aides Jato a hippy ornithologist with an  encyclopedic knowledge of the Chaco, Victor who runs an NGO that  tackles deforestation internationally (a humorous and passionate  character who tells Daniele to ‘spice up’ his report of the need for a  reserve, and fabricates a meditation centre to make it more appealing)  and Enrique a young lawyer who helps battle the bureaucrats, Daniele  formulates a plan to turn the plot into a reserve.

The film depicts this battle well as we see an increasingly exasperated Daniele being passed from one office to another trying to verify his land and enter his property, having been blocked off by neighbouring landowners. We see the slowness in which officials move and the ridiculousness of a system which has only two protection officers for the whole Chaco, and which has sold the same land deeds repeatedly to different people; something which has happened to Daniele. We also see the long-term effects of Paraguay having so recently had a dictator as immoral as Stroessner was, seeing the amount of land that was illegally obtained by Government officials and the law put in place by him, and still worryingly in place, that up to 75% of land can be deforested.

Startling facts and figures abound in this documentary. Some of the others that we find out through Daniele’s aides are that 65% of Paraguay is used for cattle farming, that farming products reaches less than 1% of the local population and that 80% of the land is owned by 3% of the population. 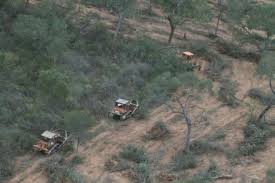 visuals reinforce this. One key interview being with Mr. Favero, a man who justifies his large-scale destruction of the Chaco by blaming consumer demand; as he puts it he has to produce 75% more to feed the 9 billion in 2050. So really it’s out of his hands! (But it does pose the question can we do anything to stop this destruction by lessening our demand? I for one want to eat less meat directly as a result). Satellite images meanwhile make real the destruction of the Chaco with its view of yellow cattle land encroaching heavily on green space.  There are also some poetic lingering shots of butterflies and other wildlife in the Chaco that shows the beauty that is being endangered.

So it is with all the will in the world that we wish the resolute Daniele success in his mission, and *spoiler alert* it is with great gratification that we see the President finally signing the documents that make his land a reserve (one can’t help thinking it’s a nice bit of PR for him), and see Daniele firmly planting his reserve sign (which comically keeps tilting), an oasis in the middle of a desert. One can only commend Daniele’s determination and passion, and it’ll definitely be interesting to see how the reserve gets along in the reported follow-up documentary.