The images Dirty Grandpa thrusts upon an unsuspecting audience become increasingly bold in their crudeness, but they’re not presented with any pretence of embarrassment. It goes balls and dick out across boundaries, and by the time the wild screwball narrative has sputtered to an awkward end, genitalia has become so normalised that you wonder why you’re even wearing clothes. The scantily clad girls populating the shore are as objectified as you’d expect, but the film presents this very firmly from the point-of-view of an elderly man, camera as his eyes scanning the beach. Not to mention the fact that Efron, game as ever, is possibly even more objectified, allowing the film to use the spectacle of his body as a constant source of lusty amusement. 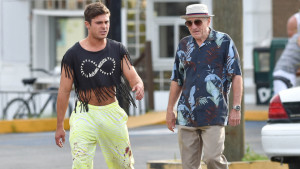 In restraining Dick’s lechery to an intrinsically sexual gaze, Dirty Grandpa presents the wearingly familiar gaze of the weary May-December narrative. It helps, enormously, that Aubrey Plaza brings her unique sardonic humour to the object of Dick’s sexual affections, at least up until an incredibly ill-advised credits sequence. In centring a sex comedy around an elderly man, and indulging this puerile humour across the generations, the film invites an audience usually alienated from the American Pie-style antics to let loose.

Which isn’t to say Dirty Grandpa presents an utopian vision of sexual freedom or that it’s unproblematic. Not at all: beyond Plaza selling the hell out of the repetitive schtick she’s given, the female characters get remarkably short shrift here, with Julianne Hough thanklessly demonised as the mistrustful fiancée and Zoey Deutch not even given any jokes as the old classmate reconnecting with Jason. In a story about the cracked patriarchy of a family unit, there’s simply no room for women beyond their orbit of the men. Nothing new, perhaps, but still an unfortunate problem easily rectified. Phillips’ inconsistent screenplay also offers Dick a strange U-turn from his early bigoted jokes to a righteous defence of Deutch’s black gay bestie Bradley (Jeffrey Bowyer-Chapman).

So comedy’s still a straight boys’ club. If you deign to forgive that, Dirty Grandpa’s disregard for common decency can occasionally be a fun enough joyride to entertain, mostly thanks to De Niro’s clear enjoyment in indulging himself in such base antics. It’s an effortlessly relaxed performance that not only sells every comedic moment, but manages to create genuine feeling in the film’s incredibly awkward swerves into melancholy. Grandpa may be dirty, but he’s got a heart of gold. And a dick of… well, why spoil it for you?

Dirty Grandpa is in cinemas from 25th January.