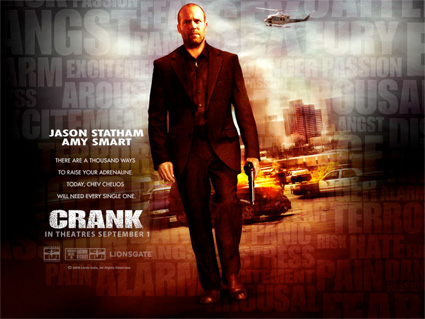 Now i don’t usually like to do this but this week i have ended up watching Crank 1 and 2 but in the wrong order. School boy error. It doesn’t have a massive impact but its always nice to see how the story follows and in this case – it follows on directly, so don’t make the same mistake.

Essentially they are almost the same film. Both very entertaining and shot in a unique style. It almost feels like a movie version of the computer game Grand Theft Auto.

In this film, Chev Chelios (Statham) is poisoned by a high power Chinese injection. It is supposed to kill him within the hour but it doesn’t. His dirty doctor is on call with advice to help him through it. His advice is – adrenaline is the only thing that will slow the poison down. He sets about on a rampage across the city to find the people responsible for putting him in the situation. Along the way doing anything and everything to keep his adrenaline pumping… including, pumping his girlfriend in the middle of the market with hundreds of people watching. There are some very funny scenes and its well worth checking out. As with no 2 – its not really one for the girls!