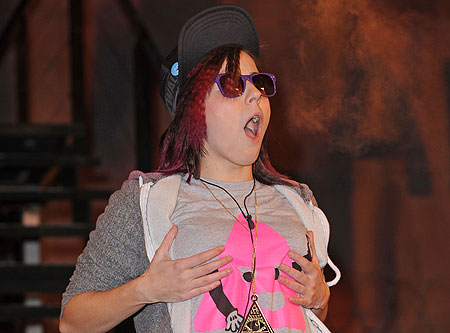 When Lady Sovereign first came into the house she had the nerve to say “I’m not a chav!” Sorry “Lady” Sovereign, I beg to differ. When Lady is put in front of a name we all picture a well presented and somewhat posh female, this is something we don’t see in Sov. Infact, she is an immature little brat that needs to grow up and start acting like an adult. She has no respect for the people around her, it doesn’t look like her has respect her the elders, and she definitely doesn’t have respect for the environment, yes I’m talking about the half eaten pear she threw out into the garden.

When I think of the word celebrity I think of the usual stereotypical words such as; rich, famous, trendy, and a somewhat role-model. I do think being role-model is very important. Who’s to say Lady Sovereign is a celebrity anyway, but as she’s on the show she needs to show the youth that it’s always about being a dumb-ass rebel who has no justification of it, oh apart from, “this is who I am, init!”. Lady Sovereign actually did have a perfect chance to get rid of her sterotype as a chav, and turn her image into something positive, but as far I, and I’m sure the rest of the viewers, can see, is that she just dug the whole deeper.

Sort it out Lady Sovereign and stop being such a chav!