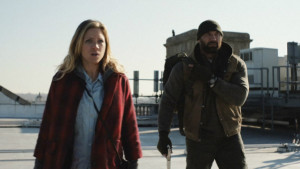 What seems like a very timely conversation in America, is at the front of Bushwick. Bushwick the alternative reality, war for peace, hope and hurt film set in a upmarket part of New York. When the Southern states declare an independent union and decide to the succession from the rest of America, it creates a rebellion. This takes shape with an invasion and continues at a pace to become like a murdering rampage. Death comes from militarized mercenary groups. They have helicopters above and armed forces below on the streets. However this is not the only thing to be feared. People on the ground are fighting whoever they come across. Shooting, stabbing and running from each other. When Lucy (Snow) partner is killed and she has to steer through these streets, it seems she will be found short. However when she finds Stupe (Bautista), who rescues her from a fate we would have expected, it will bring her survival.  The problem is, they have to cross New York with all out war. They have to do this in order to find safety and the security of the US forces.

Bushwick exposes the problems at the heart of almost all of the current issues in the US today. The urban reality that is misunderstood by the many on the right. The brewing rural hostility that is almost universally destructive and the absence of a conversation between the two. We have two sides with equally faceless beings and two people witnessing the fury of a mob. Bushwick moves at a steady pace, playing on a Hitchcock Rope type process of hiding the cuts. It has audio menace that pulse and keep this pace tense and present. Snow and Bautista are thrown around, blown up, shot, stabbed with glass and then still stand up to the chaos and confusion of a warzone. Both are able (physically and emotionally) to take this but for all its worthy parts Bushwick falls on one point.

The shapes that become fleshed out in terms of concept here are not well defined or particularly revealing. The idea of succession and a military response has a level of realism behind it but it is handled here like a video game. Content is dragged and themes are walked over again and again. As a film that would have been 60 minutes, it would have been excellent. When it clocks in at 90, you feel less committed and more anger at the repeated ignorance of those involved. However this said, the film is a worthwhile watch. It is well executed and proves that a well built, directed and written piece could have given us something to ponder….