Blade of the Immortal DVD Review 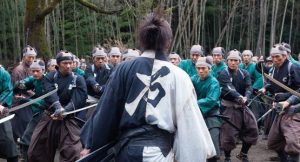 Takashi Miike gives us a jidaigeki film with sting and slashes galore. Manji (Takuya Kimura Smap boy band beauty and hero to thousands in Japan) has just killed his dubious lord and his menacing bodyguards. This wouldn’t have been so bad but he also killed the the husband of his sister Machi. Machi has lost her sanity over the death and grief stricken she is now unhinged. Rather than take the roue of ritual suicide as honour dictates, Manji has to care for her. When Manji encounters an 800-year-old nun named Yaobikuni who nature of Inquisition is both harsh and deeply probing, Machi runs from him into the woods nearby. He finds her held hostage by bounty hunting Ronin looking for him.  They kill her and take on Manji. After defeating all of them but stricken by mortal wounds, he collapses…when he reawakens and is told Yaobikuni implanted “sacred blood-worms” into his body so he will have eternal life, it seems anything might happen…

Miike is well known as a low budget film maker and genre master. This jidaigeki is not his first and I am sure it will not be his last either. It is however his most well executed. Blending the majestic violence of samurai films, the moral fable of the past with Miike’s love of traversing darker elements in society. He keeps everything flowing, action,blood, emotion and narrative. Without side stepping any. He cuts deep into the flesh of action cinema. We see the power and he pain in violence. Then he expands the idea of revenge but allows the darkness to surface. He grips the reason for the darker tones of the story as well. The tale is about the cause and effect of revenge and violence. 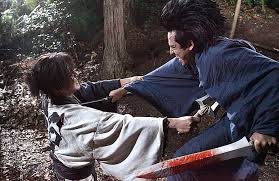 Miike opens up on the film in the interview. Its fresh and has not been seen before. I think the fan will be very happy with it but the average film fan might feel dishearten by Miike who is honest about what we are getting from a film like this and what that means to us watching it. Tom Mes has a lot to say and much of it is Miike leaning (he has written much on the man so it figures). His most interesting pieces are about Tokyo appearance in the film and the violence that Miike uses and why it is significant.