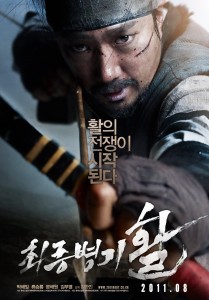 From the late 90’s to the mid 2000’s, South Korea went through a cinematic rebirth, with a new generation of directors and actors making it one of the major players in world cinema. However, but for those by bigger names like Park Chan-Wook, Kim Ji-Woon and Bong Joon-Ho, there have been few Korean movies released in the UK and US of late, and it has been generally recognised that the Korean new wave has had a relatively lean few years. Arrow: The Ultimate Weapon (which is the title this film is being promoted under, though the on screen English title at my screening was War of the Arrows), which opens the fifth London Korean Film Festival on November 3rd, won’t change that perception by itself, but it certainly speaks to a renewed energy.

Many of the action films I’ve seen from Korea in the last few years have been naked attempts to make American style films (Typhoon, anyone?), but Arrow is Korean through and through; steeped in history and tradition, it nevertheless delivers the goods with percussive and exciting action sequences. Director Kim Han-Min’s film is set in 1636, during the second Manchurian invasion of Korea, and follows three main characters. After arguing with his sister Ja-In (Moon Chae-Won) about the fact that she is to marry their childhood friend Seo-Gun (Kim Mu-Yeol), Nam-Yi (Park Hae-Il) leaves their village, by chance avoiding the Manchurian attack. Nam-Yi returns to find the village decimated, his sister and her new husband taken prisoner along with everyone else who isn’t dead, and he sets out – with his bow and arrow – to rescue Ja-In.

Perhaps it is that I lack the context (you’ll have to excuse me for not doing my reading on 17th century Korean history), but to me, and I suspect to many non-Korean audiences, for a film with a good 45 minutes of setup, Arrow feels a bit shallow. There is only quite a limited sense of the conflict between Korea and the Manchu, we’re told in the beginning that Nam-Yi and Ja-In’s father is a ‘traitor’, but it’s never very clear what that means, or who he’s a traitor to, and the manchu are largely played as cartoon villains by the screenplay (despite a charismatic turn from bastard-in-chief Ryoo Seung-Ryong). there is also a problem in that the relationships between Nam-Yi, Ja-In and Seo-Gun (whose name I’m not even certain we learn from the subtitles) should be the heart of the film, they ought to power the quest, but only Nam-Yi is very defined and Ja-In, despite a few good scenes in the second half of the film in which she shows herself to be pretty feisty, is largely a cipher. The investment is just never quite there, you understand at a gut level that Nam-Yi wants to save his sister, but the emotional weight is somewhat lacking.

So it’s flawed, but though I know that it is hard to care that much, because once Arrow takes off, first with the Manchurian invasion, and then with an outstanding set piece by the side of a river it becomes furiously exciting. The action, which makes up at least a third of the two hour running time, is outstanding. I have recently been given to complaining about Hollywood action movies because they have been reduced to a series of impressionistic shots that suggest violence is happening to someone, somewhere, but lack any sense of geography, of the space between people, and the way the action bridges that, and that this has been replaced by editing that appears to have been done by an army of crack smoking monkeys with scissors. The cutting in Arrow‘s action scenes is pacy and percussive, but the film never lacks a sense of space. This, obviously, is key to action scenes in which a bow and arrow is the main weapon; it’s all about spatial relationships and, aside from a few times when he wants an arrow to come at you (and the characters you’re watching) from nowhere, Kim Han-Min makes sure that this is always the focal point of his action sequences. 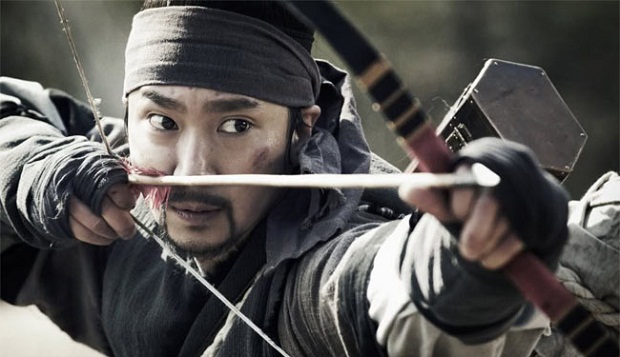 There is a visceral charge to the film. The action scenes are exciting and, though most involve a lot of the same beats (Nam-Yi holding his bow taut, the arrow flying towards the target, arrows through the neck) director Kim always finds a fresh angle for each scene. Two stick out in particular; the riverside segment has real drama to it, as it is the first time we see the captured Koreans defy the Manchu, and there’s also a brilliant and funny sword fight, and a chase that ends up with both Nam-Yi and his pursuers leaping across a ravine is incredibly thrilling (and even adds a little depth to both Nam-Yi and Ryoo’s character). There are memorable images throughout, most of them arising from the action. In a final stand off Kim again makes great use of space and stillness to accentuate the tension, while in an earlier rescue sequence there is an outstanding – practical – full body burn stunt that reminds you just why CGI isn’t the answer to all things.

The whole film looks and sounds great. Kim makes effective use of the forest locations, and brings a gritty look that is reminiscent of Michael Mann’s Last of the Mohicans, and the historical detail feels convincing. The sound is really the key though. A drum heavy score works brilliantly for the action scenes, but it is when the film quiets, and focuses on the sound of the bow; the string drawing taut, the whoosh of the arrow through the air, and the crunch as it hits, that Arrow is at its most effective.

There are a few problems; it would be nice to have a bit more character depth here, the film is a touch long at just over two hours, and the third act could easily be tightened by five or ten minutes, and there is a frustrating moment in which Kim, having painted Nam-Yi into a corner has to use an unconvincing deus ex machina to save him. These are relatively minor issues though, and I had tremendous fun watching this film. It’s a good lead off for the Korean Film Festival; accessible, exciting, mainstream, but without being so dumb that you can’t get caught up in the story, or so overcut you can’t see the action.

Arrow: The Ultimate Weapon is released in the UK – 7th October 2011.