‘Something is rotten in the state of Denmark’

Once again, the legendary words of William Shakespeare can be utilised to umbrella another episode of corruption from our Danish cousins. A Royal Affair draws allusions to the high cultural figure and its devotion to heritage positions A Royal Affair closer to royalty.

At first, En Kongelig Affære just feels like a bad version of The Duchess (Saul Dibb), as it’s narrative starts all too similar but lacked a certain maturity to put it on par. However, the overdue Mikkelsen-infusion meant that Nikolaj Arcel’s period drama took a different and rather distinct direction. The narrative focus withdrew from that which made it strikingly Duchess, and became its own.

It is the 18th century. An aggressive adolescent and puny king of Denmark, Christian VII (Mikkel Boe Folsgaard), who is abscent of any majestic quality, seeks to wed Caroline Mathilde (Alicia Vikander) of England. Caroline’s initial enthusiasm rapidly transpires into desperation as the new queen of Denmark is shamelessly wronged.

Johan Friedrich Struensee, proficiently played by Mads Mikkelsen, is appointed as the king’s personal physician in order to correct his indulgent lifestyle of booze and hookers. As King Christian VII grows more comfortable with his guardian (think J. Edgar), he succumbs to Johan’s persuasion to better the society of his people. The weak highness voices the ideas of his new best friend and it soon becomes clear that Johan has a much larger and much more personal agenda. The German Physician’s appointment as new member of the court comes with a royal affair and a revolution. 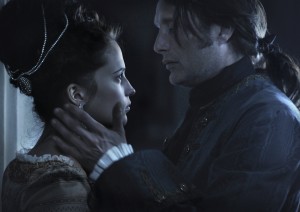 The induction of Casino Royale’s villain injects purpose into the narrative and also infuses ripeness and class to the overall. Only then does this foreign language production begin to fill its potential.

Regrettably, the narrative tends to plod along at turtle pace, frustratingly so that not even the beautiful cinematography could compensate. A Royal Affair gives way to lengthy moments of tardiness, which almost go to suggest that plot has been forgotten and the narrative falls victim to its own visual beauty. Infrequent does something fundamental occur and the best thing about Arcel’s latest efforts, besides the decision to cast Mads, was its resolution; there is a tiny gem of a twist that encouraged me to almost pardon its flaws.