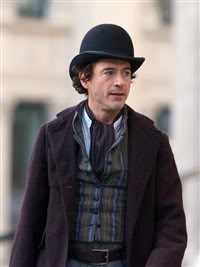 Deadline have reported this week that production company, Warner Bros. have hired Drew Pearce (No Heroics, Iron Man 3) to write the script for Sherlock Holmes 3, this would be the second sequel to the 2009 Guy Ritchie directed film starring Robert Downey Jr. and Jude Law as Holmes and Watson respectively.

This news comes before the opening of Sherlock Holmes: A Game of Shadows, which is due for release on the 16th December. The film focuses on the battle between Holmes, Watson and their nemesis, Professor Moriarty (Jared Harris). While Noomi Rapace (The Girl With The Dragon Tattoo) joins Rachel McAdams in the sequel.