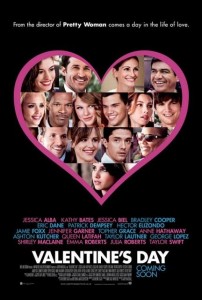 If you want to drag your other half out for a romantic cinema date on Sundays theres plenty of slushy films for you to choose from. New release Valentines Day is out on Friday and has a star studded cast including Julia Roberts, Jessica Biel, Bradley Cooper, Jamie Foxx and Twilight hunk Taylor Lautner among others. We haven’t seen it yet but have managed to snag some tickets to the London Premiere on Thursday so we’ll report back then. Alternatively there are two classic romances being re-released – Pretty Woman is being shown nationwide (it was directed by Gerry Marshall who also directs the aforementioned Valentines Day so no prizes for guessing why this is being re=released) and there are special screenings of Breakfast at Tiffanys at the BFI and nationwide on Valentines day as well. Max Ernsts classic Letter from an Unknown Woman is also getting a limited showing mainly at the BFI so you’ve got four different eras of romantic cinema to choose from!

So with all these new romantic films and  old classics being re-released on Friday we’ve decided to theme this weeks poll around your favourite romantic film. Do you yearn to watch the old classics like Casablanca or do you prefer a more modern take on romance such as in Richard Curtis Love Actually? Vote in the poll on the right hand side of your screen now or let us know in the comments below what you’ll be watching this Sunday!