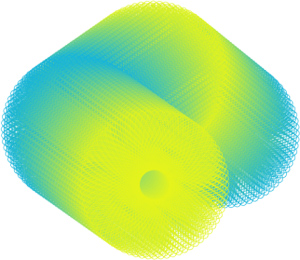 Convergence Sessions is an integral strand of the Convergence programme taking place throughout March 2016, showcasing innovation, creativity and entrepreneurship in arts and technology. The Sessions will create an immersive playground of ideas, comprising a programme of talks, experiential education workshops, panel discussions, performances and installations. Sessions take place from 17-19 March at Ace Hotel Shoreditch.

Convergence continues to work with Mixcloud and pioneering digital arts collective onedotzero for a third year and brings together a host of new partners such as seeper, Makerversity, CMU, PRS for Music, Spotify, Google Labs’ new digital publishing platform Editions at Play, artists The Gaslamp Killer and Dan Deacon in conversation with Mary Anne Hobbs, a Point Blank Masterclass with Dave Okumu from The Invisible and an exclusive live collaboration between AV artists The Light Surgeons and sonic surfer Scanner.

Academic partners include Sonic Arts BA students from University of the Arts London and Guildhall School of Music who will collaborate on the Young Artists Academy in the Barbican Pit theatre 15 – 18 February and present work as part of the Convergence Arts Programme.

Convergence Sessions provides an opportunity for those passionate about the future of art and society to exchange ideas and engage with a community of thinkers, artists, innovators and makers.

Colour Choir (4-6 March, Kachette, Old Street) is an immersive audiovisual installation created by artist and musician Py, creative director Silent and long term Radiohead collaborator Andi Watson. The piece is an intense sensory experience that digitalises colour through the visualisation of the human voice performed live by Py, creating a choir of colour and sound in an environment where visitors can re-interpret, effect and perform it. The colour frequencies change the state of the audience, encouraging people to question the link between the senses in a polyphonic celebration of digital synaesthesia.

As part of the Colour Choir installation, on Saturday the 5th March Houndstooth artist Throwing Snow will present a debut of an exclusive live AV Axioms performance.

The Convergence digital art programme includes four works curated by Cyland – the organisation behind Russia’s largest multimedia festival (CYBERFEST) held every year at The Hermitage Museum. Drawing on average 10,000+ people to their events in around the world (St Petersburg, Berlin, Bogota, Tokyo, NYC and beyond) – an exhibit at Village Underground marks Cyland’s first appearance in London and the beginning of an especially symbiotic partnership with Convergence. The Cyland exhibit will feature installations from some of Russia’s most recognised new media artists. Free to the public, the exhibit will be in The Gallery at Village Underground for the duration of Convergence.

Following a legacy of iconic urban artists who have created massive public art for the Great Eastern Wall Gallery, Convergence 2016 will unveil the first new media piece to grace this unique street art space in the heart of Shoreditch. Embodying the intersection of art and technology for Convergence, internationally renown new media artist Ryan Wolfe was selected to create a new, site-specific, interactive piece to debut on this block long exterior wall of Village Underground. The founder of new media studio Living Industries, Wolfe is known for his hybrid, kinetic, responsive installations which have been commissioned for public spaces at 21C Museum (Cincinnati), D. E. Shaw (NYC), Gogolfest (Kiev), The Oriental Pearl Tower (Shanghai), the Hermitage Museum (St Petersburg), e-Halle (Basel), Convention Center (Istanbul), and atop Roppongi Hills (Tokyo) among others. On March 8-9, the artist will be installing his interpretation of life in the streets of London – a modern, new media, urban art-hybrid wall installation melding bits of Rube Goldberg’s fantasy inventions, the soul Mondrian’s Broadway Boogie Woogie, Keith Haring’s bold lines, and contemporary lighting in a way that is purely Ryan Wolfe. The next chapter in the Great Eastern Wall Gallery’s public art history debuts Thursday 10 March with the opening of Convergence and will be on view long-term, visible from the street 24/7.