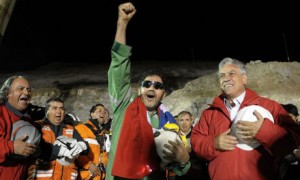 The story of last year’s Chilean mine rescue, of 33 miners who were trapped half a mile below the earth’s surface for a total of 69 days, is set to be adapted for the big screen, ComingSoon.net reports.

Puerto Rican José Rivera (The Motorcycle Diaries) is set to script the film, which has been agreed upon by representatives of the 33 miners. An official statement reads, “The film will recount the events surrounding the mine’s collapse and the subsequent rescue efforts”.

Phoenix Pictures’ Mike Medavoy (Black Swan, Shutter Island) and Edward McGurn will produce the film under the former’s Half Circle banner, while two long-term Chilean associates, Carlos Eugenio Lavín and Leopoldo Enriquez, will executive produce. A director has not been announced.

The film’s release will coincide with the publication of the official book of the miners’ story, written by the Los Angeles-born Pulitzer Prize-winning journalist Héctor Tobar.