The Rise and Rise of Jon Hamm
Home
News

The Rise and Rise of Jon Hamm

Jon Hamm landed a few small roles when he moved to Hollywood to act but he never quite reached the top until he scored the lead in the hit television series, Mad Men – and his 2008 Golden Globe Award for Best Performance by an Actor in a Television Series gained him instant recognition. In anticipation for the release of Million Dollar Arm, here is a list of television and film roles that have made Jon Hamm the household name he is today.

As the Creative Director at Sterling Cooper Advertising Agency, Don Draper can persuade a client in the blink of the eye. His colleagues consider Don to have the best copy pitch in the entire advertising industry. Hamm plays the tragic anti-hero with such intensity that it’s difficult to hate this unfaithful misogynist ad man with too many vices to count. As the series slowly comes to an end, audiences wonder if Don Draper will ever get what he deserves.

Stepping away from the seriousness and drama on Madison Avenue, Jon Hamm moved over a couple blocks to 30 Rockefeller Plaza. He played Dr. Drew Baird, the flawless neighbor of Liz Lemon (Tina Fey) who ends up winning her affections. Everyone, including Liz, sees him as the perfect man; he’s a great pediatrician and a fantastic tennis player. Eventually, Liz realizes that Drew is unintentionally manipulating the people around him with his looks. Drew eventually returns for an episode in season four when Liz finds out he has severed both of his hands in two completely unrelated incidents. Hamm’s role in 30 Rock showed off his comedic chops, proving that he can be as funny as he is serious.

Hamm returns to the world of television comedy with a few guest appearances on Childrens Hospital. He plays the young Arthur Childrens, the founder of Childrens Hospital, in a collection of flashbacks. The character only appeared in the 1970’s and never appeared again. Hamm also plays Derrick Childrens, the son of Arthur and secret identity of Valerie Flame (played by Malin Åkerman). 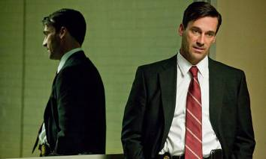 Hamm is easily the star of this 2010 Boston crime film directed by and starring Ben Affleck. The town casts Hamm as FBI agent Adam Frawley, who is on the trail of a band of bank robbers. The role is a far cry from Don Draper and can even be considered on the opposite end of the morality spectrum as the 1960’s creative director.

After being dumped by her boyfriend, selling her bakery and losing all of her life’s savings, Annie (Kristen Wiig) doesn’t have much confidence left. She develops a no-strings-attached sexual relationship with Ted, (Hamm) a self-absorbed man who doesn’t reciprocate the feelings that Annie hopes for. After being kicked out of her best friend’s bridal shower and getting into a car accident, she calls Ted to pick her up. Annie eventually breaks things off with Ted and realises what her heart actually wants. Hamm’s character is hilariously aggravating and every scene he’s in causes some sort of uncomfortable laughter. 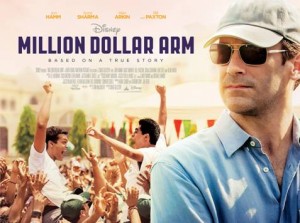 Friends with Kids depicts the life of platonic best friends Jason and Julie (played by Adam Scott and Jennifer Westfeldt, respectively) who live in the same New York City apartment building together. Hamm plays one of Jason and Julie’s best friends Ben, who is married to Missy (played by Kristen Wiig). Their sexually centered relationship starts to dwindle once they have children and Ben often discourages Jason to have a child with Julie when there are no feelings involved.

Based on a true story, Hamm plays J.B. Bernstein, a struggling sports agent scouting for baseball players. After watching a game of cricket and an episode of Britain’s Got Talent, Bernstein gets the idea to search through cricket players to find new talent. He develops the Million Dollar Arm contest, which will allow the top cricket bowlers a chance to get a Major League Baseball contract. In Million Dollar Arm, Hamm proves that he is not just Don Draper, but that he is an authentic film star with many more exciting opportunities ahead of him.