New version of ‘Bonnie & Clyde’ to come to our screens

Deadline are reporting that Neil Burger (Limitless) is in talks to team up with Up In The Air screenwriter Sheldon Turner to bring an updated version of the Depression Era outlaws Bonnie and Clyde to our screen.

Rights have been acquired on Jeff Guinn’s Go Down Together: The True, Untold Story of Bonnie and Clyde, published last year. The book paints a less romanticized version than the 1967 Arthur Penn-directed film that starred Warren Beatty and Faye Dunaway. For one thing, the outlaws were just 22 when they were gunned down by a former Texas Ranger after they’d killed seven people. The first person Clyde Barrow killed was the cell mate who had sexually abused him repeatedly. Barrow had a strong code of honor: when a lifer in the prison took the rap for the killing, Barrow and his gang broke him out. The book also suggests that Bonnie Parker was a prostitute before joining up with and eventually going down in a hail of bullets with Barrow. 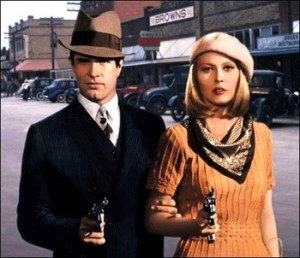 Burger is currently working on Uncharted: Drake’s Fortune, the Sony Pictures adaptation of the video game.

Well as many suggest, Penn’s ’67 trademark film starring Warren Beatty and Faye Dunaway is quintessential watching for the start of the New Hollywood era of cinema which highlighted a much more violent and youth perspective of cinema (along with The Graduate) but it is also a very highly glamourised version of events. This new version of the story is suggesting a much darker (perhaps truer?) tale of events which took place in the 1930’s. As a fan of the original film, I have to be quite dubious of any new representation of the pair (especially as Beatty and Dunaway will be immortalised as the pair) but I do look forward to seeing what (is gradually) made.