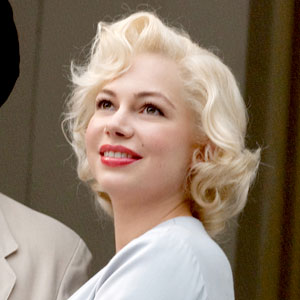 With Halloween just around the corner, it seems even Hollywood’s hall of fame are sending down some seriously supernatural vibes.

Blue Valentine actress Michelle Williams is already receiving critical acclaim for her portrayal of the iconic blonde bombshell Marilyn Monroe in the upcoming British drama My week with Marilyn. But it’s not just the critics who are buzzing about her performance, as E! News claims the late Hollywood starlet herself showed some beyond-the-grave approval.

Speaking exclusively to E! News at the Hollywood Film Awards yesterday, Williams said: “While we were filming, something came out in the National Enquirer that a psychic had spoken to her and that she approved of what we were doing and she thought I was doing a really good job…So maybe she likes it!”

The film, which also stars Judi Dench, Kenneth Branagh, Eddie Redmayne and Emma Watson, follows the story of British set assistant Colin Clark, who helps Monroe escape from her Hollywood lifestyle for a week in Britain.

31-year-old Williams has already received a best actress award for her work in My week with Marilyn and she recently expressed her gratitude for landing this sought-after role. She said: “I’ve been a fan of her since I was a 12-year-old girl, so it was a dream come true.”

My Week With Marilyn is set for UK release on November 18th 2011.