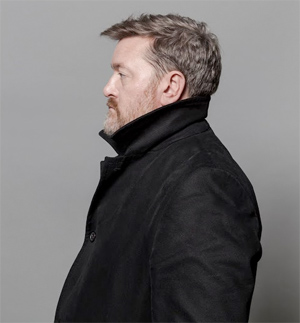 As the lead singer and lyricist with elbow for over 21 years, Guy has been the recipient (with his ‘best mates’) of the Mercury Music Prize, a BRIT Award, two Ivor Novellos and a host of other plaudits. This year sees him take a break from band duties to release his debut solo album, Courting the Squall, recorded at Peter Gabriel’s Real World Studios and Manchester’s Blueprint Studios.

2016 marks a welcome return for Guy to both Southbank Centre and Meltdown, following Massive Attack’s invitation to elbow to play their Meltdown festival in 2008. The show was particularly memorable as hundreds of amateur singers formed a choir and joined the band on stage in the Royal Festival Hall.

Alongside some very well known artists, introducing lesser-known acts will be a theme for Guy’s Meltdown as he builds on his reputation for championing new and undiscovered artists through his work on BBC 6 Music’s Guy Garvey’s Finest Hour and lately with his TV show Music Box with Guy Garvey.

Guy Garvey, said:
“I see this as the perfect opportunity to shine a light on some amazing new talent whilst recognising and celebrating the artists that have had an influence on the new sounds of today. Beyond that I want my Meltdown to be a party where everyone feels invited and everyone leaves having had the best night out.”

Jude Kelly, Artistic Director at Southbank Centre, said:
“Guy Garvey’s outright enthusiasm for sharing music and introducing new art and artists to the widest possible audience fits hand-and-glove with what Southbank Centres strives for across its festival programme. Guy is an exciting choice – his contagious energy and creative spark has inspired an avid following, not to mention critical acclaim – and is the perfect figure to continue the Meltdown legacy.”

Gillian Moore, Director of Music at Southbank Centre, said:
“It is our absolute pleasure to have Guy taking the reins of Meltdown this year. He has a formidable reputation as a musician, an unyielding passion for introducing audiences to his own vast musical tastes, and is generous in inviting people to take part in music making – we still fondly remember the choir joining elbow’s show in 2008’s Meltdown. All of these things make Guy the perfect Meltdown Director.”